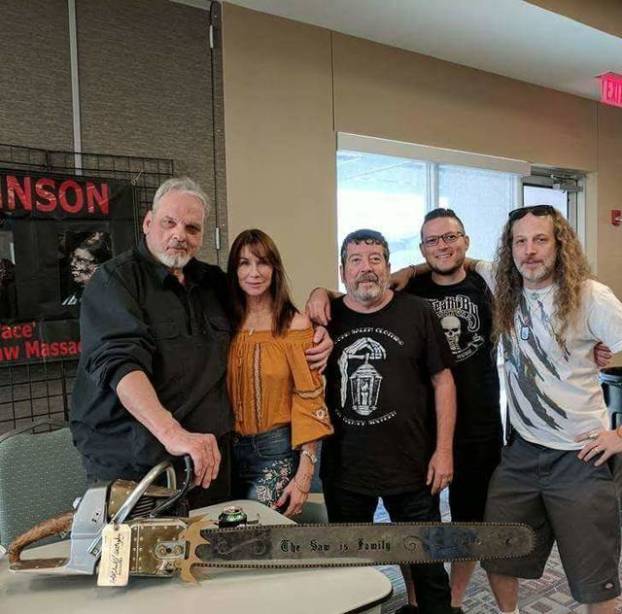 John Dugan, who portrayed Grandpa Sawyer in the original 1974 version of “The Texas Chainsaw Massacre” will be headlining a long list of horror and sci-fi actors who will be on site at Saturday’s Harlan Haunt Fest at The Harlan Center.

(This is the third story in a series about one of Harlan County’s newest and fastest growing festivals.)

The days are ticking down for the arrival of the fourth annual Harlan Haunt Fest, Harlan’s premier Halloween event featuring pop culture and area folklore. This Saturday, the convention will kick off featuring some great horror and sci-fi talent. Both internationally-known and locally aspiring actors will be on site to meet fans. Some of the actors who will be present are from iconic movies and TV shows such as “The Texas Chainsaw Massacre”, “Guardians of the Galaxy Vol. 2”, “Goosebumps”, “The Hunger Games” series, “The Walking Dead”, “Stranger Things”, and many more.

John Dugan, who portrayed Grandpa Sawyer in the original 1974 version of “The Texas Chainsaw Massacre”, will be meeting fans, signing autographs, and hosting a discussion panel about his work. Dugan will share what life was like on set as well as what it was like to work with renowned horror director Tobe Hooper, who unfortunately passed away earlier this year. Beyond “The Texas Chainsaw Massacre” franchise, Dugan has starred in a number of horror movies such as Stephen King’s “The Boogeyman”, “The Devil Dogs of Kilo Company” and “Rock Paper Dead”, an upcoming film by the creators of “Friday the 13th” and “Child’s Play.”

Actor and comedian John Anderson is excited to be coming to Harlan with three friends, Rory Healy, Josh “TKO” Turner, and artist Matthew Atchley, affectionately called “The 4 Horseman of Comicons”. Anderson’s interest in acting was sparked by his love of cosplay. He has attended many charity events in the Birmingham, Alabama area dressed as Batman, The Joker, or Green Arrow, and has had many roles since he began his acting career, appearing in films such as “Sleepy Hollow”, “Spider-Man: Homecoming”, and “Guardians of the Galaxy Vol. 2” as a Ravager.

Anderson’s good friend Rory Healy also played a Ravager in “Guardians of the Galaxy Vol. 2” and will be appearing alongside him, sharing their experience with the film. Healy has had a slew of roles in other popular franchises such as “The Hunger Games” series, “Ant-Man”, “Captain America: Civil War”, and the 2015 “Goosebumps” film with Jack Black in which he played a Vampire. Healy is a recurring character in the popular Netflix show, “Stranger Things”.

Josh “TKO” Turner was featured in season seven of The Walking Dead as one of Negan’s Survivors. Outside of “The Walking Dead”, he has been spotted in “Snapped: Killer Couples”, “Under the Dome”, “Nashville”, “The Indy Wrestler”, and more. Josh is also a pro-wrestler and an advocate for the charity organization “Fighting for Autism” in Knoxville, Tenn. Josh’s daughter. Kaylie, has followed in her father’s footsteps. She has had many acting roles in her young life. In season five of “The Walking Dead”, she was a child walker. She has also had roles in “Stranger Things”, “Cry for Blood”, and “The Indy Wrestler.”

Also from “The Walking Dead” and a fan favorite member of the Haunt Fest family, Jeremy Ambler will be returning for this year’s event. Ambler trained in The Walking Dead “Zombie Schoo”l and has been featured as a zombie in many productions. His role on “The Walking Dead” made such an impact that he was chosen to be used on the show’s merchandise packaging. Ambler can be found in a host of other productions such as “Killing Lincoln”, “The Town that Dreaded Sundown”, and many more.

Sal Lizard will share his not-so-merry character, Vampire Santa. He is a real-bearded, professional Santa with a dark side. Vampire Santa can be seen in “Young Blood: Evil Intentions” as well as two upcoming features — “The Vampire Who Saved Christmas” and “The Vampire Santa”. Lizard was also in “All Sinner’s Night” alongside fellow Haunt Fest guest John Dugan. He has also played Santa in “The Box” and “I don’t Know How She Does It”. A well-known comedian, he was featured in a popular YouTube series called “The Tourettes Guy” as Danny’s Dad.

It wouldn’t be Halloween without a clown, so Haunt Fest will be featuring Shauna Tackett — AKA Ann Arkist, who plays Sunshine the Clown on her popular YouTube show. She has also had roles in independent films throughout Kentucky, and she is working on a horror film as Sunshine the Clown at the present time. WWE Hall of Famer Ricky Morton will be in attendance all day. Morton won an astounding 70 championships throughout his career, and is known as one half of the tag team The Rock n’ Roll Express. The Rock n’ Roll Express was recently inducted into the WWE Hall of Fame.

A special treat for Haunt Fest attendees this year will be the actual goblin head that was featured on the front of the Happy Toyz truck in Stephen King’s classic film “Maximum Overdrive” Owner Tim Shockey purchased the goblin head in 1987 and used it as a prop in his own video shop for years. He completely restored the prop in 2011, and now he and the goblin head travel to events all over the country so he can share it with fellow horror fans.

Haunt Fest will be hosting Harlan County’s own actors as well this year. Premiering at Haunt Fest will be “Harlan, Ky’s Manzo Shepherd’s Story”, the recounting of a true story of murder and scandal that took place in Harlan County in the 1940’s. Local Coming Up Roses flower shop employee David Saylor will be starring as Manzo Shepherd. Saylor is ecstatic to have taken part in the project, saying “It was an absolute honor to have the role… I tried my best to make the character seem human while portraying him as accurately as I could.” Also appearing in the film are local residents Michael Corriston, Zack Long, Wendy Clem, Joe Howard, Austin Rutherford, Randy Cole, Darla Saylor Jackson, and many other local actors.

Rutherford, who will also be featuring his custom costumes at Haunt Fest, is excited for the premier as well as the event overall.

“The Texas Chainsaw Massacre is one of my favorite franchises so I am super excited to meet John [Dugan],” Rutherford said. “I think we have a great lineup this year that attendees will enjoy.”

Rutherford has also worked in the film industry on several films, including “The Sinner” with Jessica Biel, and “Above Suspicion” with Emilia Clarke, that was filmed here in Harlan.

Look for the world premiere of “Harlan, Ky’s Manzo Shepherd’s Story”, as well as discussion panels for many celebrity guests, at the Harlan Haunt Fest Oct. 7 beginning at 10 a.m. Entry fee for the all-day event is $10 to enjoy some fear and fun in the mountains. For more information about Harlan Haunt Fest, log onto the event’s website at www.harlanhauntfest.com.

Those who travel KY 72 from Dressen toward Liggett are aware of the work underway near KY 2425, with many... read more