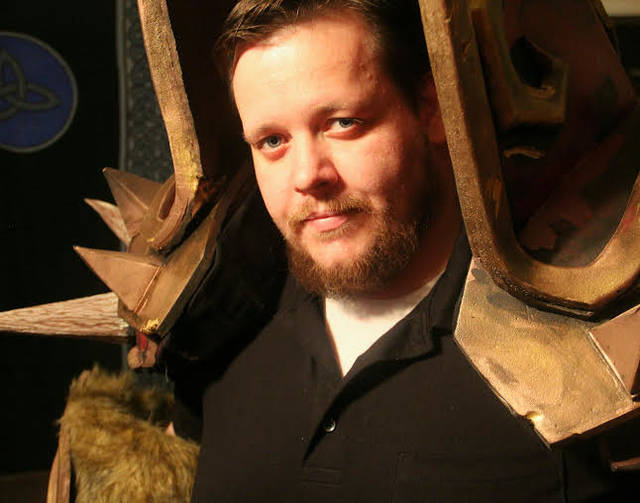 Willie Middleton, a Harlan native and current Tazewell, Tennessee resident, will be one of the featured artists at Saturday’s Harlan Haunt Fest. Middleton is a horror and science fiction sculptor. He is pictured wearing a massive ORC suit that he built.

(This is the second story in a series about one of Harlan County’s newest and fastest growing festivals.)

A comic/horror convention would not be complete without plenty of art. That’s why Earl McKinney makes sure that art plays a significant part in Harlan Haunt Fest — a local pop culture and horror festival that McKinney helps organize and produce every year at The Harlan Center. Taking place this Saturday, Harlan Haunt Fest will feature not only an art display and contest for local science fiction and horror artists, but will also feature some of the most world renowned top fantasy artists.

“We do an art contest and display to give more recognition to fantasy art as a legitimate discipline of art since it is one of the foundations of all our popular culture,” McKinney said. “We want to encourage people who do this type of art, and show them that we appreciate it.”

Submissions will be taken Saturday morning at Harlan Haunt Fest on the upper level of The Harlan Center for the “Fantasy and Horror Art Contest and Display.” Prize money will be awarded after judging takes place later in the day. Also located on the upper level of The Harlan Center, horror and science fiction sculptor Willie Middleton will be demonstrating his skills and will also have some of his work on display and for sale. On the main floor, highly-popular artists Mike Hoffman and Gary Kwapisz will be set up with their work.

“Mike Hoffman is one of the top fantasy artists in the world with a style all of his own, but is often compared to the legendary Frank Frazetta,” McKinney said. “Gary Kwapisz is a legend of his own, having been called ‘the last great Conan artist’ after having done eight years of Marvel Comic’s ‘Savage Sword of Conan.’ It’s a thrill having popular artists of their caliber coming to Harlan and being a part of our event.”

Hoffman’s background includes comic publishing with Marvel, DC, and Dark Horse. Currently he self publishes, and has become internationally known for his master comic and fantasy artistic abilities. Besides art, Hoffman is also a writer, creates original music and animation.

“I’m looking forward to this unique experience of coming to Harlan County and setting up for Haunt Fest,” Hoffman said. “I will be bringing a lot of my horror merchandise, prints, magazines, and music albums. I’ll be bringing some ghosts along, too!”

On the upper level of The Harlan Center, the annual Harlan Haunt Fest “Horror And Fantasy Art Contest And Display” can be found. Also located among the facility’s upper level art exhibition will be Middleton, an Evarts native who now resides in Tazewell, Tennessee, where he sculpts his highly-sought-after clay works of art. From Yoda to Hell Boy, Middleton’s sculptures are intrinsically detailed and are fast becoming a social media sensation. He remembered when in sixth grade, his teacher recognized his artistic abilities and gave him some molding clay.

“I thought it was Play-Doh,” Middleton said. “But years later, something just clicked, and I started sculpting non-stop. It’s a creative drive in me that I just have to do.”

Middleton said his earliest influence with the horror and science fiction genre came from his father.

“I remember watching the old black and white Godzilla movie with my father, and I loved watching every minute of it,” Middleton said. “And then later, I watched Clash of the Titans, and I just became fascinated with the world of fantasy.”

While Middleton produces several popular clay pieces like Chucky, Jack Skellington in “The Nightmare Before Christmas,” Gremlins, and Medusa, he also creates original sculptures, as well.

“I’m looking forward to meeting everybody Saturday, and showing people what I love to do and what I love to create,” Middleton said. “I hope hundreds will turn out, because Haunt Fest is really one of the coolest events to take place in this area.”

Kwapisz, who has a long and varied career in the comic business, working as a publisher, artist, and writer, will also be set up on the main floor of The Harlan Center Saturday. Kwapisz has been a Marvel editor, was the artist for the Conan Books, and has even been artistically involved with Sesame Street and the movie Jurassic Park. Most recently, Kwapisz partnered with an old friend to form their own publishing company titled “History Graphics,” and together they publish the graphic novels “Civil War Adventure,” which has garnered rave reviews.

Harlan Haunt Fest’s “Fantasy and Horror Art Contest and Display” will take place on the upper level of the Harlan Center. Harlan Haunt Fest has teamed up with The Harlan County Arts Council this year to produce the contest and display. Harlan County Arts Council President Jennifer McDaniels said the scope of talent that’s been evident through this art contest was encouraging.

“Harlan County and our surrounding area has a wealth of talent when it comes to artistry,” McDaniels said. “And this art contest through Harlan Haunt Fest has been an excellent way to discover and see the impressive talent that we have out there. I’m looking forward to curating this exhibit, and having locals to drop by and view it on Saturday.”

The Harlan Haunt Fest “Horror And Fantasy Art Contest” has three categories — Color, which includes original work using oil, acrylics, water color, pastels, or colored pencils; Black & White, which includes any original work using pencils, charcoal, pens, or ink; and 3D, which includes any original three dimensional media, clay, wood or paper. Anyone with a Harlan Haunt Fest ticket (which are $10) may enter up to three pieces total in any combination of the three categories. The deadline for submitting entries is 2 pm on Saturday. Judging will take place at 5 pm. Cash and ribbons will be awarded. Those wishing to display their art but do not want to compete are welcome to bring their work to be exhibited during Harlan Haunt Fest on Saturday.