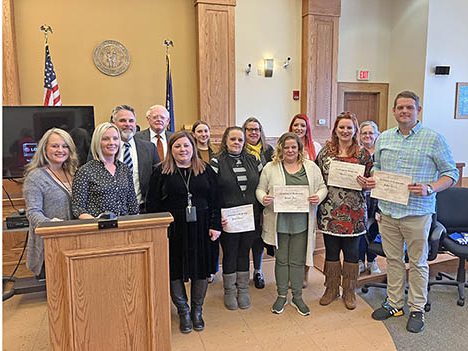 The Harlan Circuit Court’s Drug Court program saw four individuals complete the program on Friday, with a ceremony recognizing the graduates in the Circuit Courtroom at the Harlan Justice Center.

“This day is a wonderful day. It’s one of our happiest days,” Hendrickson said. “We’re having drug court graduation day and celebrating the graduation of four participants.”

“To me, it’s the most satisfying part of my job,” Hendrickson said. “To see so many people come through here and get well. I calculated that we have a 39 percent successful completion rate since 2015. I can’t say enough about how much these participants have worked to get their lives together and see light at the end of the tunnel and become good citizens.”

“I started district court drug court when I took office six years ago,” Lisenbee said. “Since that time, we’ve had 23 participants, which is not as many as I would like, but it’s still good. We’ve got five active participants right now.”

Lisenbee mentioned all five current participants are employed, and all the program’s participants over the years have paid off many court-related costs and child support.

“I look out there, and I don’t see anybody that hasn’t been affected in some way, fashion, or form by addiction or drugs,” Lisenbee said. “I know that we all know it impacts all of us.”

Lisenbee explained that parents with addiction harm their children, which often leads to their own problems with drugs and addiction.

Blevins stated that those who participate in Drug Court begin work on their GED if they do not have a high school diploma and participate in therapy groups and community service projects.

“They currently help at the animal shelter, at Christ’s Hands, and here at the Justice Center,” Blevins said. “They are working. They meet with staff once a week in the beginning. They’re working 30 hours a week, and they are randomly drug tested. They have a lot they have to do each week, and it’s not an easy process.”

Blevins also commended Hendrickson and Lisenbee, explaining the judges are not required to have a Drug Court program.