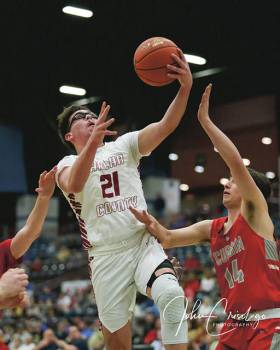 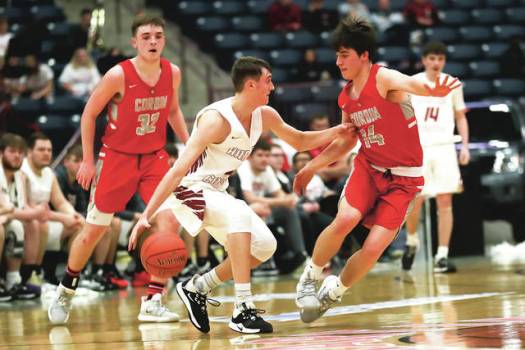 <p>Photo by Les Nicholson</p> <p>Harlan County’s Taylor Spurlock tried to work free as Corbin’s Matthew Taylor and Cole Hicks in the 13th Region Tournament on Wednesday. Spurlock scored 24 points as the Bears advanced with a 74-58 victory.</p>

CORBIN — In a seven-point win at Corbin earlier this year, the Harlan County Black Bears shot 61 percent from behind the 3-point line and grabbed an early lead the Redhounds couldn’t overcome. HCHS coach Michael Jones wasn’t counting on 14 3-pointers in the rematch Wednesday in the opening round of the 13th Region Tournament at The Arena in Corbin.

Harlan County did a nice job attacking the basket and was able to carry over some of the defensive momentum from wins over Bell County and Harlan in last week’s 52nd District Tournament, using the box-and-chaser that worked well in the championship game win over Harlan to keep Corbin senior guard Matthew Taylor contained. The strategy paid off as HCHS limited the Hounds to only three field goals in the first quarter, building a lead the Bears never relinquished in a 74-58 victory.

“We started the game chasing Taylor and we wanted to shadow (Alex) Byrley. For the most part, I thought we did an outstanding job guarding them,” Harlan County coach Michael Jones said. “Taylor will still get his, but he was five below his average with 14. We also did a lot better job on Byrley than when we played them down there. The kids responded to the game plan and played their butts off.”

“We have struggled to score throughout the year, and we had a feeling they might chase Matthew after seeing them do that against (Harlan’s Jordan) Akal,” Corbin coach Tony Pietrowski said. “We didn’t handle the ball real well either, and we didn’t rebound it well. That usually happened when we didn’t play well this year. We needed more attempts at the rim and we didn’t get it with the turnovers.”

Eighth-grade guard Carter Stewart scored 15 points to lead the 16-14 Hounds. Taylor scored 13, followed by Cole Hicks with 13 and Byrley with 12.

Wilson had three baskets in the opening quarter and Spurlock added two as HCHS outscored Corbin 17-10. The Hounds just got up one shot in the opening four minutes, due in large part to four turnovers, as the Bears grabbed an 8-2 lead. Corbin got as close as one before a 3-pointer from Huff started a 9-3 run to end the period.

Another Stewart 3 pulled Corbin within two, but HCHS answered with eight straight points on 3-pointers by Wilson and Huff to go up by 10. The Bears led 47-40 going into the final period as Hicks closed the quarter with a basket.

Harlan County was able to get to the hoop against the Corbin press in the fourth quarter and connected on nine of 13 shots, led by Cole with four baskets and Spurlock with three. Spurlock and Wilson combined to hit seven straight free throws late in the game to extend the lead to double digits.

“We told them all week that we hit 14 3-pointers down there and shot 63 percent, but we can’t bank on that again,” Jones said. “We wanted to make them guard us off the dribble. That makes us a lot better team.”

“They were a hard matchup for us, and they exploited us a little bit by making some of those 3s early in the game,” Pietrowski said. “We needed to get big Gavin (Allen) more involved, but they got the advantage early with those 3s.”

The Hounds’ record this season and early regional exit haven’t been common for the Hounds in Pietrowski’s 19-year run as coach, but he praised his team’s effort.

“Our record isn’t indicative of how hard they worked this year,” he said. “We lost several close games and were on the edge of being a 20-win team. We continued to practice hard and play hard and tried to get better. I was proud of how they persevered this year. We have a good nucleus coming back, but we have some work to do in the off-season, including getting bigger and stronger. We lost to a good team tonight, and I want to congratulate Mike and Harlan County. He has a great program over there.”

The Bears will play Clay County in the semifinals on Saturday at 1 p.m. The tournament continues Thursday with North Laurel playing Knox Central at 6 and Harlan taking on South Laurel at 7:30.