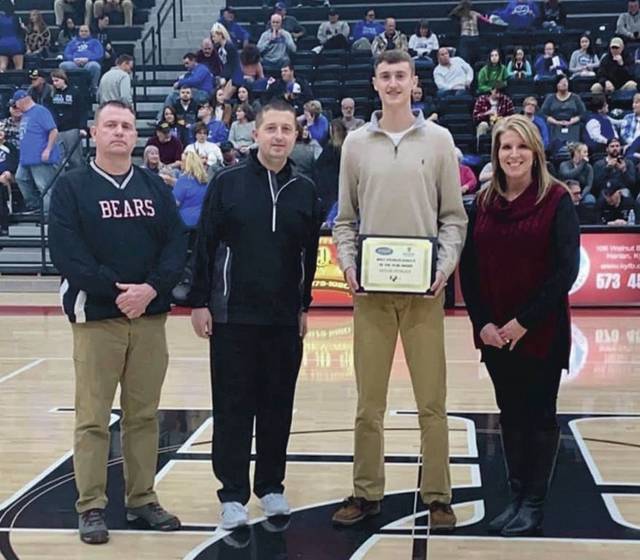 Taylor Spurlock can’t remember a time when basketball wasn’t part of his life.

The Harlan County High School senior guard grew up in a home with two older brothers who loved the game and a father and grandfather played basketball at Morehead State University. He was a standout at Wallins Elementary School, then moved into the starting lineup for HCHS as a sophomore. His senior season has been his best as he’s averaged 17.4 points and 5.9 rebounds per game for the 21-10 Bears, who will play Harlan on Friday in the 52nd District Tournament finals. Spurlock will likely be included on the all-region teams announced during next week’s 13th Region Tournament, and he received a statewide honor earlier this week when he and North Hardin’s Addison Sutton were named the 2019-20 Midway University/KHSAA Male and Female Basketball Student-Athletes of the Year.

“This is a big honor for Taylor and our school. We’re all proud of what he has accomplished,” said Harlan County coach Michael Jones. “Taylor has been a big part of our program since he got here and has really stepped up as a senior and has played a big role in our success.”

According to a press release from the Kentucky High School Athletic Association, the awards are based on excellence in community service (20 percent), academics (20 percent) and athletic performance (60 percent). Students must possess an overall grade point average of 3.0 or better to qualify, and must be academically eligible during the season in which they are nominated. School administrators, coaches, and athletic directors nominate student-athletes online at KHSAA.org, with the award recipients chosen by a panel of representatives from Midway University.

“Nominating a young man like Taylor was an honor for me because we are talking about someone that I had the great pleasure of teaching,” Harlan County High School athletic director Eugene Farmer said. “Taylor’s academic and athletic accomplishments collectively are unparalleled in my opinion, which is why I nominated him. Taylor is so worthy of an award like this because he has always gone overboard to deflect attention from himself, instead always focusing on making others better. This award couldn’t go to a more deserving student-athlete.”

Spurlock’s 4.0 grade point average and a 31 on the ACT more than met the academic qualifications. He also earned a full scholarship to the University of Kentucky by winning a MATHCOUNTS competition as an eighth-grader. His public service included his participation in the Empty Stocking Fund drive with the Harlan County High School National Honor Society.

The Bears advanced to the 13th Region Tournament for the fifth time in six years with a win over Bell County on Tuesday. HCHS has been ranked among the region’s top teams all season with Spurlock among the team leaders.

“I think I had a bigger role this year, and I have good people around me to help out. I knew I had to try to do more this year, but we have several people contributing,” Spurlock said. “I think we always have five people on the floor who can score and that helps a lot. We are a matchup problem for any team.”

“I’ve had a ball in my hand since I can remember,” Spurlock said. “Both my older brothers (Leighton Piper and Treyce Spurlock) worked with me, plus my dad (Paul Mark Spurlock) and Greg (Coldiron) led me in the right direction and put me in the situations I need to be.”

Spurlock was on Harlan County’s regional championship team as a freshman in 2017, a team led by his brother, Treyce, along with Cameron Carmical and David Turner.

“When I was a freshman, those guys set a good example for me and what I wanted to accomplish as a senior,” he said. “I want to be a leader like they were.”

With no dominant team heading into this year’s regional tournament, Spurlock likes the Bears’ chances of making another run at the Sweet Sixteen.

“I think we have a good shot this year, but I think any of the teams in the regional could win on any night,” Spurlock said. “We’re all confident and bought in and will do whatever it takes to win.”