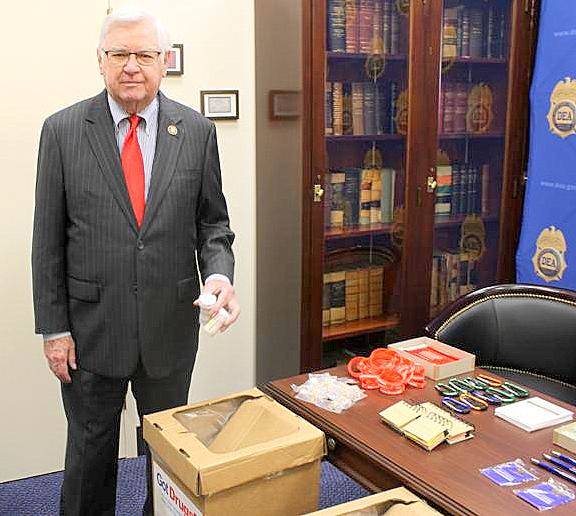 This weekend, the Drug Enforcement Agency (DEA) will host its annual Prescription Drug Take-Back Day and Congressman Hal Rogers encourages all southern and eastern Kentuckians to clean out their medicine cabinets to keep unused and unwanted painkillers off the street.

Thanks to Operation UNITE and support from Rogers, every county in Kentucky’s fifth congressional district has a designated disposal box at a participating law enforcement agency. For the first time, the DEA will also accept vaping devices and cartridges.

“Multiple studies have confirmed that the majority of abused prescription drugs were taken from the home of a family member or friend’s medicine cabinet,” said Rogers. “The best way to combat that type of abuse is to get rid of unwanted powerful painkillers by dropping them off at a location where medication can be properly disposed.”

According to the 2018 National Survey on Drug Use and Health, 9.9 million Americans misused controlled prescription drugs.

This year, the annual DEA take-back day comes on the heels of the one-year anniversary of the federal SUPPORT for Patients and Communities Act. It has been identified as the most significant single bipartisan legislative effort against a drug-related issue in our nation’s history.

“One year ago, Congress proved we are most effective when we work together on issues that directly impact American families. With overwhelming support from both sides of the aisle, the SUPPORT for Patients and Communities Act was passed by both chambers and signed into law by [United States] President [Donald] Trump to combat the nation’s deadly opioid crisis, and we’re already seeing the benefits of our continued efforts,” said Rogers, who cosponsored the comprehensive legislation. “The SUPPORT Act incorporates a holistic approach, much like the three-pronged effort initiated by Operation UNITE nearly 20 years ago focusing on law enforcement, treatment and education.”

Hope is rising in the mountains of eastern Kentucky and across the country, as the impact of effective legislation becomes tangible. New data recently revealed a decline in drug overdose deaths for the first time in nearly 30 years nationwide. Specifically, in Kentucky last year, the Office of Drug Control Policy reported a 15 percent reduction in overdose deaths.

The SUPPORT Act includes a bipartisan bill co-authored by Rogers and Rep. Katherine Clark (D-MA), incentivizing medical providers to pursue a career in substance use disorder (SUD) treatment in areas of the country where providers are desperately needed. The SUD Workforce Loan Repayment Act provides loan repayment of up to $250,000 for participants.

“It takes all of us working together to save lives and prevent the cycle of drug abuse in our communities. We need more SUD treatment professionals, improved access to recovery assistance, more research and continued investments in prevention and education across the board,” said Rogers. “The SUPPORT Act works in concert with the Comprehensive Addiction and Recovery Act (CARA) and the 21st Century Cures Act that passed in recent years. The reduction in overdose deaths is proof that we must remain consistent and diligent in our efforts to end the opioid epidemic.”

To get involved with on-going efforts to combat drug abuse in southern and eastern Kentucky, visit Operation UNITE’s website. To find a drop-off location near you, visit the DEA’s take-back day website. All Kentucky State Police posts participate in the DEA Prescription Drug Take-Back Day.

Harlan High among top in ACT scores in Kentucky