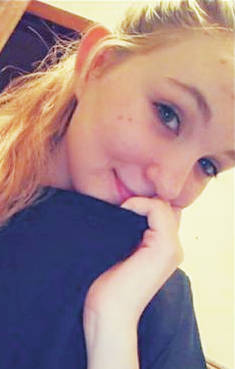 The Kentucky State Police are searching for a 16-year-old girl reported missing by her mother.

According to a press release, Kentucky State Police Post 10 officials in Harlan received a call at approximately 5 a.m. on Tuesday about a missing 16-year-old juvenile in Loyall. Master Trooper Michael Cornett responded to 204 Wilkerson Street to begin an investigation.

The preliminary investigation indicated that Caitlyn Bosley was last seen by her mother at the residence on Monday at approximately 4 p.m. The mother left the residence to go to work and when she returned the girl was not home. The mother attempted to locate her child on her own, but after having no success she contacted Post 10 officials in Harlan to report her missing.

Caitlyn Bosley is described as a white 16-year-old female last seen wearing a black hoodie, pants and black knee boots. She is 5-2 and 105 pounds with blue eyes and a thin build.

At this time, the case is still under investigation by Cornett.

The Harlan County Detention Center advises a man who walked of work release several weeks ago is now back in... read more