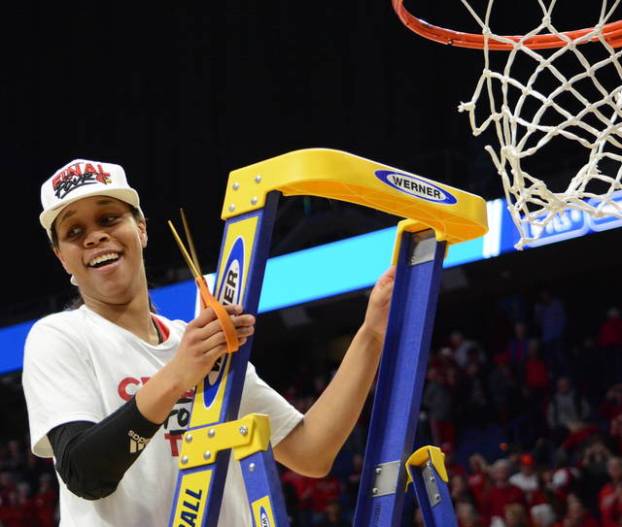 Asia Durr was all smiles as she cut her piece of the net following a 76-43 win over Oregon State on Sunday at Rupp Arena. Durr lead all scorers with 18 points.

LEXINGTON, Ky. (KT) — Louisville is still dancing and will be taking its act to the Final Four.

The top-seeded Cardinals punched their ticket to Columbus with a 76-43 win over Oregon State on Sunday at Rupp Arena. Louisville, which improved to 36-2 overall, will take on the winner of the Mississippi State-UCLA encounter in the national semifinals set for this weekend.

Louisville will be making its third Final Four appearance in 11 years with a team that has won 11 straight games since a 69-58 loss to overall No. 1 seed Connecticut on Feb. 12. Cardinals coach Jeff Waltz praised his team’s character as a big reason behind their ability to win their first four NCAA Tournament games by double digits.

‘I can’t say enough about their character,” he said. “The basketball stuff is there, that’s great. It’s their character. It’s who they are. It’s what they do off the floor. You can’t be a great basketball team and have the results you want if you don’t carry it over in your personal life. And we truly do have wonderful young women who are wonderful role models to my children, to coach Purcell’s children, and that means more to me than winning basketball games.”

Louisville had an easy time with the Beavers and forced 17 turnovers, scoring 24 points off those miscues. Louisville also connected on nine 3-pointers, including four by guard Asia Durr, who led all scorers with 18 points Durr was named the Most Outstanding Player. Louisville had just three turnovers.

“Every time you take care of the ball, you get more shots, so I think that was key,” Durr said. “Last game we turned the ball over, I think, nine times in the first half, so Coach Walz was really talking to us about that, you can’t turn the ball over nine times in the first half, which is not good. Coming into this game we were trying to take care of the ball more so we’ll be able to get more shots.”

Despite the five-year drought, Louisville senior Myisha Hines-Allen said the Cardinals have been building on the team’s success during the past decade.

“The program was already built, so it was basically when I came in my freshman year, we had five seniors, so it was basically, if you want to be successful, if you want to keep this program afloat, you’ve got to do what you’ve got to do,” Myisha Hines-Allen said. “You’ve got to do what the people behind you already done, and that plays hard, play Louisville ball, and I feel like it’s just me left and AC, but I feel like we’ve done that, and we’ve gotten great people in here to help us out with that, and they’ve bought into what Louisville basketball is and what coach Walz is wanting. That’s why we’re so successful and we’re here.”

To prepare his team for a Final Four run, Waltz approached the Big Dance once step at a time.

“Our whole goal is to come out and compete for a national championship, but we know you can’t do that if you don’t get to a Final Four,” he said. “Now we’ve got a four-team tournament, our third one in three weeks, and they’ll be dialed in and ready to go. There’s no question about it. So we’re just — our kids have taken it game by game, and that’s what we’re going to do. We’re not worried about anything else but this game tonight. We’ll sit there and watch this game tonight, figure out who we’re going to play, and then start preparing on Tuesday.”

Before Louisville can think of a rematch against the Huskies, Hines-Allen said the Cardinals have to focus on their national semifinal opponent, which will be either Mississippi State or UCLA.

“Before we even get to UConn, we have to play either Mississippi State or UCLA, so that’s our first focus,” Hines-Allen said. “It’s not getting ahead. It’s not jumping ahead or anything like that. It’s one game at a time. But I mean, once you play UConn, you see how they play. They’re a great team. They’re a dynasty. So I mean, you see what the coaches want from them. You see how they perform. You see how they run the floor every time. They rebound the ball really well, and they run their plays.”

Redskins improve to 3-0 with victory over Patriots Cumberland improved to 3-0 in middle school baseball action with an 8-4... read more