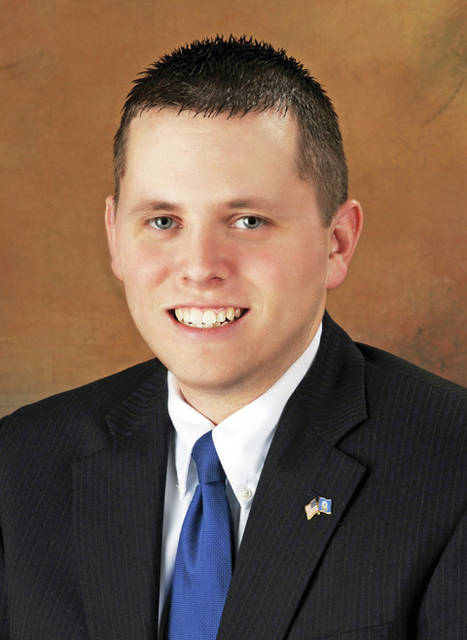 Mosley brought up the subject of grants about midway through his presentation to the chamber.

“From a grant perspective, I want to highlight some of the grants we’ve been able to receive that have helped us replace some of the lost revenue that we experienced on the coal severance side,” Mosley said.

“We received a $60,000 land and water conservation grant to construct a new skate park at Dressen,” Mosley said. “If you’ve seen the digging going on down there for the last few days, that’s the skate park construction underway.”

Mosley said there was also a $20,000 donation from a private citizen to aid in the building of the skate park.

“You all remember Sue Ford, who lobbied for years for that project,” Mosley said. “We never were able to get anything done while she was alive, but I know this is something she would be very proud of. This is going to be really nice once it’s done.”

Mosley said if the weather cooperates, installation of the park should be completed by April 1.

“We also received a $350,000 hazard mitigation grant to conduct buyouts of homes impacted by a severe mudslide,” Mosley said. “That mudslide occurred during the 2015 blizzard.”

A $60,000 Emergency Management grant was awarded to install a generator to power the courthouse.

“The courthouse hosts our emergency operations center during a disaster,” Mosley explained. “That install took place last month and is ready to be used when necessary.”

Mosley added another $60,000 grant was awarded to acquire equipment for the Emergency Operations Center.

According to Mosley, a $30,000 grant for ambulance service was received as well as a $10,000 grant to construct a website solely dedicated to economic development.

A $50,000 grant was awarded for the construction of the sensory smart playground at the Dale Belcher Memorial Park in Dressen.

“The sensory smart playground is the project I’m probably the most proud of that we’ve been able to get done in the last couple years,” Mosley said. “It’s for children who have sensory disorders such as autism…this was done in partnership with the Harlan Rotary Club.”

Other grants received include a $80,000 grant to design a 5.2 mile section of train from Cumberland to Lynch, a $150,000 grant to re-certify levees, $50,000 from the Frazier Foundation for the Benham Inn roof, a $10,000 grant for maintenance of the golf course in Cumberland and a $25,000 in grants over the past three years for the Cumberland Senior Citizen’s Center.

“I attribute many of these grant successes to my staff, in particular, (Harlan County Treasurer) Ryan Creech and (Harlan County Deputy Judge-Executive) Colby Goss,” Mosley said. “Colby is always looking for the next grant opportunity…that we think we can legitimately get.”

Mosley said grants are now a greater priority due to the decline of coal severance funds.