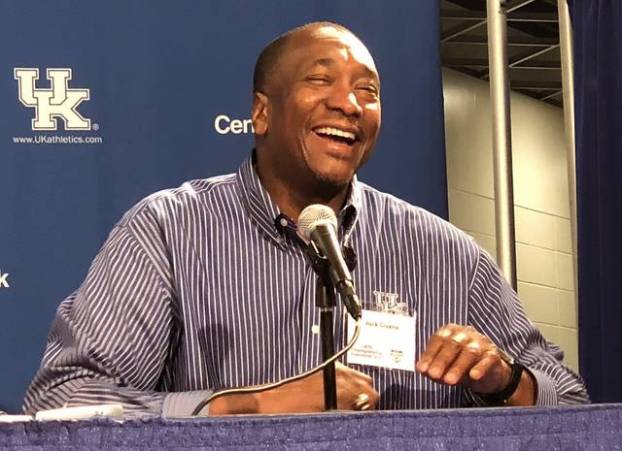 Jack Givens shared a laugh Thursday during a press conference featuring members of the team’s 1978 national championship team. The team will be honored during Saturday’s game against Missouri at Rupp Arena.

LEXINGTON, Ky. (KT) — It’s been nearly four decades since Jack “Goose” Givens got loose and carried Kentucky to its fifth national championship four decades ago. For Givens, the feat seems like yesterday.

“This is a big-time for us and it’s hard to believe 40 years have passed since we were last together on the court,” Givens said. “We are very excited as teammates about being together again. We’re looking forward to a lot of fun.”

The school’s 1977-78 national championship squad will be honored with several events this weekend and share the spotlight during Kentucky’s game against Missouri Saturday night at Rupp Arena. Like Givens, Kyle Macy said reaching the 40-year mark of the team’s achievement is a remarkable milestone.

“It’s kind of like when you turn 60 years old and it doesn’t feel bad until somebody says it,” Macy said. “Then when somebody says its been 40 years since you won the championship, then it sounds like it’s been a really long time. On the other hand, when you get together, you remember all those things that happened during the year, it seems like it was just yesterday. It’s great when you can reunite and spend some time together.”

Rick Robey, one of the team’s two first-round NBA draft picks following the team’s 30-2 campaign, capped with a 94-88 victory over Duke in the national championship game, said the passing of time since winning the title is evident.

“My body feels like it’s been 40 years,” Robey said. “It seems like it was really yesterday and every day here in Kentucky you are running into people talking about that team. It’s amazing it’s gone (by) this quick. My dad always said the older you get, the quicker time goes.”

Even though the Wildcats were favored to win the title before and during the season, the players never felt the pressure from within and took a business-like approach throughout the course of the year.

“It had been a very pressure-packed year for us, we were ranked No. 1 for virtually every week of the season and had fallen to No. 2 once and along with that comes a lot of pressure,” Givens said. “I give the coaching staff credit for deflecting that, absorbing it all and keeping us shielded. There was a huge sigh of relief when we walked off the floor after winning it all.”

Robey added the Wildcats had no choice but to win it all that season.

“We had been close several times and this was our last go around,” Robey said. “Each game (in the tournament), someone stepped up and made it happen.”

Although it was hard to keep from hearing the outside noise that year, James Lee said the Wildcats knew retired and legendary coach Joe B. Hall was under pressure after coming close to winning the title three years earlier in John Wooden’s last game at UCLA.

“It was the pressure of winning,” Lee said. “You’re coaching at the University of Kentucky and it’s a pressure-cooker jar. It’s part of the nature of the beast. (Coach Hall) had some great teams and we came close my freshman year. When you come that close, you have an itch and you want to scratch it. That’s what it was all about.”

Robey said winning Hall’s first and only title at Kentucky was rewarding.

“To be able to get that first championship was huge for him,” Robey said. “Coach Hall, he was a tough son of a gun. Very few players liked coach Hall during their career here, but once they retired and stepped back from basketball, they really appreciated what coach Hall was about. I know as a player when I went to practice, if coach Hall wasn’t jumping me, I knew that I wasn’t going to get any better. The criticism didn’t bother me as much as some of the other guys on the team.”

Kentucky won its first 14 games, before suffering a 78-62 loss at Alabama, followed by three straight victories, Kentucky then dropped a 95-94 overtime game at LSU, and that’s all it took for the Wildcats to get refocused for the remainder of the season.

“I think that was a wake-up call to let us know, if you don’t get ready each night, you can get beat,” Robey said. “We had a really good game against (UNLV) in our final game at Rupp Arena (92-70 win) and then going into that Florida State game (to open the NCAA Tournament), we kind of stumbled a little bit, if we would have lost that game, coach Hall would have never had been able to make it back to Kentucky. I felt for coach Hall, thank goodness we won.”

Although the Blue Devils were a tough task in the finals, Robey said overcoming Arkansas, coached by former UK coach Eddie Sutton in the semifinals, proved to be an even harder feat.

“I felt really confident going into the game because I felt like we probably beat the best team the game before (Arkansas),” Robey said. “I felt like we were going to be able to get on top of them and dominate. That’s kind of what happened.”

Although most of the team will be intact this weekend, the late Mike Phillips, a key component of the team’s twin towers , will be missed by his former teammates. Phillips passed away after a fall at his home in 2015.

“He’s truly missed and was part of our family,” Lee said.

With March Madness around the corner, Lee is already looking back and ahead as the Wildcats prepare for another postseason run.

“Every year I get these chill bumps in March and April because you can reflect and go back and think about the things you were doing and how you were preparing yourself for those particular games,” Lee said. “But to put a number on it such as 40 years, it’s great.”

MIDDLESBORO — In a season of record-breaking domination in the 52nd District, the Harlan County Lady Bears set one more... read more