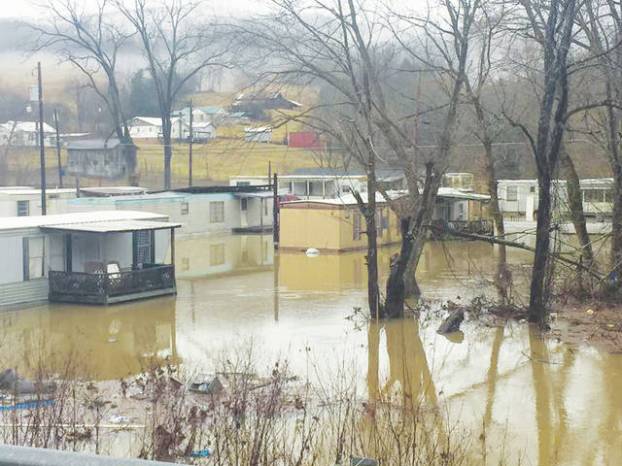 Homes in the Tremont community of Harlan County were under water after heavy rains on Saturday caused flooding in the area. The county’s damage assessment process began Sunday afternoon and is continuing according to Harlan County Judge-Executive Dan Mosley.

Harlan County has seen its share of flood devastation, with this weekend’s events adding to the toll floodwaters have taken on the county over the years.

Harlan County Judge-Executive Dan Mosley explained many people have experienced damage to their homes and property since the rain began early Saturday.

According to Mosley, approximately 30 people were still in shelters as of Monday morning because their homes were damaged.

“At one point, we had more than 50 people in shelters because many could not get back to their homes,” Mosley said. “We had some people trapped across creeks because the bridges were covered.”

Mosley said numbers are not yet available concerning how many homes have been damaged.

“Our damage assessment process began Sunday afternoon and is continuing,” Mosley said. “Our friends from Laurel County have come to help us do damage assessment…we have five teams, one in each district, assessing the damage.”

Anybody who has suffered damage due to the flood is asked to report it.

“What we need people to do is call and report their damage to our office,” Mosley said. “We’re keeping a database of everyone that experienced damage and we’re sending someone out to look and take pictures and document all this.”

The information will be used to help determine if Harlan County is eligible for state and federal assistance due to the flood.

Mosley pointed out there are multiple reasons the damage reports are important.

“Even if we don’t get federal assistance, a lot of times we have the Red Cross or church groups or other organizations that want to come help, and we will know who to direct them to that have been most impacted in the community,” Mosley said. “It’s important that people report whatever the damage is so we can attempt to get some help for them.”

Mosley mentioned with the ground saturated and more rain in the forecast, additional problems are possible.

“I feel like we’re prone to have mudslides right now,” Mosley said. “I think we could see some more mudslides and additional rain would compound that issue. People need to be aware.”

Awareness is a large factor when it comes to safety during an emergence situation.

“People took a lot of individual responsibility,” Mosley said. “We put the word out early on Saturday telling people to pay attention, this could get bad, be aware.”

Among all the damage reports so far, one incident still remains a mystery.

“We had a report of a building floating down the river,” Mosley said. “The top of it hit the Coldiron Bridge, and it kept going. It went on and came out the other side. From there on, we don’t know what happened to it.”

Mosley said there have been no reports so far to shed light on where the structure may have come from.

“It’s a mystery to us as to where that came from or what it even was,” Mosley said. “We’d like to know.”

Possible damage to a bridge as well as water and power outages are among the consequences of the flooding.

Mosley said he has asked the state to inspect a bridge at Coxton.

“The water completely overtook it Saturday night,” Mosley said. “I’ve asked the state to come look at that.”

The event caused one water outage, located at Kenvir.

“The Black Mountain Utility District water line is adjacent to the river and it washed that out,” Mosley explained. “BMUD is working diligently to fix it. The problem is there is no way to get to it because the water is still up…But they’re going to start distributing water at the Yoakum Creek Fire Department today.”

Mosley said at one point approximately 500 structures were without electricity, including homes in Verda, Holmes Mill, Ridgeway and Cranks, but all power was restored by Monday.

Harlan County, along with much of Eastern Kentucky, suffered severe rains on Saturday causing flooding throughout the area. Harlan County... read more