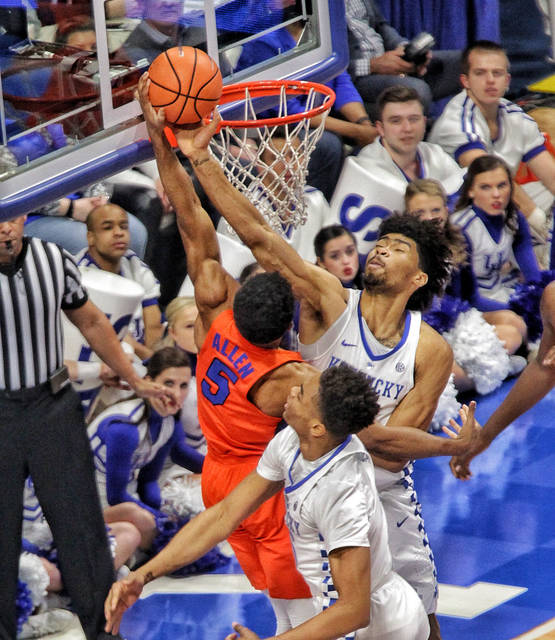 Kentucky forward Nick Richards blocked a shot in the Wildcats’ 66-64 setback to Florida on Saturday night at Rupp Arena.

“I’m good,” Calipari said. “I know there are some people out there that will be panicked and all this. Be panicked. I’m glad I’m not sitting with you because I am fine.”

Although the Wildcats (14-5, 4-3 Southeastern Conference) had a 16-game home winning streak against non-conference opponents and a 30-game home winning steak against league foes snapped, Calipari bases his optimism on his team’s defensive performance against then Gators, one of the top offensive teams in the nation.

Kentucky limited the conference leaders to just 33 percent shooting from the floor and shut down Florida’s 3-point attack. The Gators made six of 30 shots from long range and made just three in each half. For a team that has struggled defending long-range shots this season, the Wildcats held their own from the perimeter.

Although Kentucky defeated Vanderbilt at Memorial Gymnasium two weeks ago, Calipari wasn’t convinced his team had turned the proverbial corner. He became really concerned following a 76-68 loss at South Carolina. Calipari admitted the Wildcats were out-hustled at times against the Gators, but said his team “didn’t understand the importance” of playing with a sense of urgency down the stretch.”

“We had some freshman mistakes, up three and throw the ball out-of-bounds; what in the world are you thinking? A blocked shot, a kid doesn’t have a shot, he ball fakes and shoots an air — what? Whoa. Those, I can cure those,” Calipari said. “(I liked) the ability to pass the ball to one another, the ability to really scramble defensively and do some good things against, we’re going to be fine, whew. I was worried after South Carolina now. I’m not worried after this. We’ll be fine. I was worried after Vanderbilt to be honest with you, and we won that game. They do this and they stay this course and this is who we are, we’ll be fine.”

Calipari wasn’t pleased with 16 turnovers, many of which were unforced, and liked the way the Wildcats rebounded, but likes the way his team defended overall.

“Do we have a ways to go? Yeah, I’ve got to clean up some stuff. But if they don’t share the ball; if they don’t play with the spirit to try to win games, all that other stuff doesn’t matter. They shared the ball today. They defended pretty well.”

The Kentucky coach also lauded the team’s effort down the stretch and an ability to keep it close until the final buzzer. As long as the Wildcats are giving the effort, Calipari isn’t going to get discouraged.

“They gave themselves a chance to win,” he said. “We got down eight. We started the half and it was like, oh, my gosh, what didn’t you understand? But you know, I don’t want to get frustrated with the guys because they are trying. I’ve got great kids.”

In moving forward, the Kentucky coach is glad the Wildcats have a full roster intact in moving forward. Jarred Vanderbilt is starting to settle into the rotation and Quade Green returned after missing the previous three games because of a back injury.

“The good news right now, I’ve got a full roster,” Calipari said. “So if you are really not giving it this game, I can play somebody else. So there’s not arguments on the bench, no back and forth. You don’t have to. Out next.”

Green scored just two points and missed all four of his three-point attempts against the Gators, while Vanderbilt tallied three point and grabbed six rebounds, while he’s still trying to get conditioned for the next eight weeks.

“This is very, very much encouraging, and we went one out of 11 attempts to end a half,” he said. “Think about that. And we still had a chance. It’s because we guarded and we did some good stuff.”