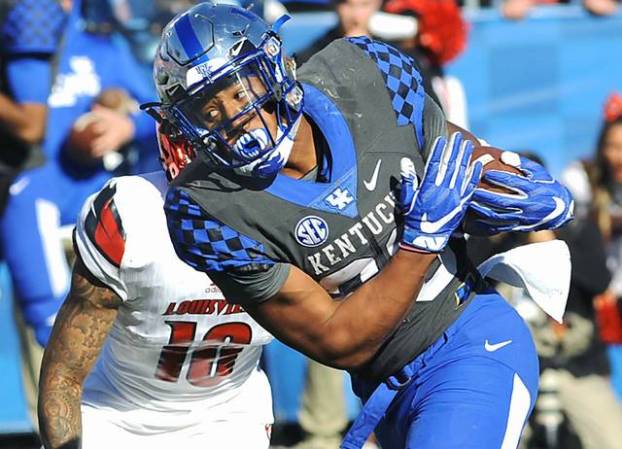 Benny Snell battled for tough yards near goal line against Louisville Cardinals in November. He will be a junior next fall and is the cornerstone of the UK offense.

LEXINGTON (KT) — Kentucky has proven it belongs in the middle of the pack in the Southeastern Conference with back-to-back postseason appearances during the past two years.

For the second straight season, the Wildcats won seven regular-season games and broke even in the conference, a sign Kentucky is within striking distance of reaching the next level, which includes league championships and bigger bowl appearances.

Despite the recent success, the Wildcats still have many hurdles to overcome in order to become a major player in the SEC and when it comes to winning close games. Three of Kentucky’s six losses were by a combined margin of five points, including a 24-23 setback to Northwestern in the Music City Bowl last Friday in Nashville.

“For us to take the next step, we’ve got to be more consistent on offense to try to put people away and be able to finish,” Kentucky offensive coordinator Eddie Gran said.

Kentucky coach Mark Stoops applauded the success of the team during the past 24 months and praised the senior class for taking the next step and providing leadership on and off the field.

“These guys have worked extremely hard to put ourselves in position to win the games and go to back-to-back bowl games and have the opportunity to win seven, eight, nine games,” Stoops said. “That’s not always been the case. These guys have laid the foundation and I know each and every one of them — and as Courtney (Love) alluded to within the locker room, that he wants them to continue to push the program and innovate the program and take it to another level. I anticipate we’ll do that.”

Kentucky will be without quarterback Stephen Johnson, a big reason the Wildcats won 14 games during the past two years. In his short stint with Kentucky, Johnson threw for 4.342 yards and ranks ninth on the school’s all-time passing list. He threw for 23 touchdowns and rushed for six more during his career.

“He’s like a quarterback god to me,” Kentucky running back Benny Snell said. “I’ve seen that man take too many hits that you don’t come back from. He’s overcome so much adversity. That’s one of the greatest quarterbacks that I’ve been beside of. He has a lot of heart and I’m so happy for him. He had a great journey.”

Johnson’s backup, former starter Drew Barker, announced Tuesday that he plans to transfer for his senior season, leaving the short-handed in the pocket. Junior college transfer Terry Wilson will now be counted on to take Kentucky to the level.

The Wildcats also lose four senior receivers, including Garrett Johnson, Charles Walker, and Blake Bone, but will rely on Tavin Richardson and a slew of newcomers, including Lynn Bowden to carry the load on the corners. Snell returns for his junior season, as will tight end C.J. Conrad, who suffered a knee injury in Kentucky’s regular-season finale against Louisville.

The biggest question mark in moving forward is Kentucky’s defense, which faltered down the stretch, especially when it came to defending the run. Although the Wildcats ranked among the conference and national leaders in run defense early in the year, the momentum tapered off down the stretch. Kentucky gave up 333 rushing yards in the loss to Northwestern, 381 against Georgia, also a blowout setback and surrendered 346 more against Lamar Jackson and rival Louisville.

Defensive leaders Josh Allen and Mike Edwards are pondering a jump to the next level, while linebacker Denzil Ware’s future with the Wildcats is uncertain after he was suspended for the team’s bowl game against the Wildcats.

The Wildcats also have to replace kickers Austin MacGinnis and Matt Panton and coaching changes also could be looming. Kentucky can add a 10th coach starting next season and Stoops plans to add another defensive assistant to help shore up the team’s woes on that side of the ball.

Stoops knows his team left a lot on the table this season but is looking forward to the future.

“Our team knows they can be very, very good, and win lots of football games in the SEC and go to even better bowls,” he said.

A day UK fans will remember for many years

It just seems like dates and sports go hand in hand. Now I’m not talking about dates with a significant... read more