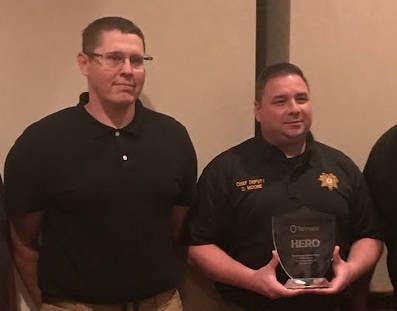 The Harlan Fiscal Court recognized Harlan County Chief Deputy Jailer Derrick Moore during a recent meeting due to Moore’s being presented with an award stemming from his capture of an escaped inmate from the Harlan County Detention Center.

Moore was awarded the HERO Award at the Kentucky Jailer’s Association Conference in October.

Harlan County Judge-Executive Dan Mosley brought the topic up near the end of the meeting.

“I’d like to recognize Derrick Moore, who received a very prestigious award at the Jailer’s Conference earlier this month,” Mosley said. “There had been an inmate escape, and Derrick was able to retrieve that inmate without having to use weapons or any type of force. He was able to negotiate with him and return him back to the jail.”

According to a press release, the HERO award is sponsored by Telmate and awarded to a corrections officer who goes above and beyond the call of duty and personifies a standard of excellence and professionalism in the face of great adversity. The crystal plaque was presented to Moore on Oct. 10 by Telmate representative Chuck Gevedon, with Harlan County Jailer B.J. Burkhart and Captain Ronnie Bennett present, in an audience of jailers and deputy jailers from across state.

The award stems from an incident occurring on Sept. 6 when Grover Botkin, 53, was placed back into custody by Moore after having walked off a work release detail earlier in the day.

“What some don’t know is that The HERO award is nationwide, and truly something to be recognized,” Burkhart said. “I am so proud of Derrick and everything he stands for, not just as a deputy, but as a person. He has a deep moral conscience and that’s the kind of person I like to have working alongside me during tough times. Running a jail is a great responsibility and we are faced with great adversity almost on a daily basis. Anyone who faces great responsibility knows how important it is to have people around you that you can truly trust to do the right thing and who trust in you the same. Derrick and I have that kind of trust.”

Moore said he was not happy when Botkin walked off work release.

“I want to be completely honest,” Moore said. “When inmate Botkin walked off work release that day I was very angry. There were no signs, no reasoning that made sense. I stayed at work longer than usual because I didn’t want to go home mad. I had a moment of aggravation where I thought, Lord, maybe I should just find another job, one that doesn’t come with so much 24-hour stress.”

Moore left the jail at about 6 p.m. and headed home.

“As I drove on U.S. 119 toward home, I prayed out loud,” Moore said. “I remember saying ‘Lord, I know you gave me this job, and surely you can sustain me in this job.’ I had no more than said that when I looked up and saw inmate Botkin trying to flag a ride along the highway.”

Botkin was erratic, telling Moore he’d rather die than go back to jail.

“I treated it more as a suicide prevention than an apprehension,” Moore explained. “I really thought he contemplated jumping in front of traffic. I’ll tell you what I told my colleagues at the convention, the Lord gave me the words to say, and just gave Botkin a mind to listen. I know the Lord put me in a position to succeed. He gave me my job, and he can sustain me in it. I give the Lord all the praise for letting it work out like it did.”

Moore added when Botkin was returned to the jail, he again became erratic, threatening Moore and other deputy jailers. Botkin had to be restrained.

“The Lord gave me a window of opportunity, and I’m so thankful,” Moore said. “This award is greatly appreciated, but the Lord deserves all the credit, not me.”