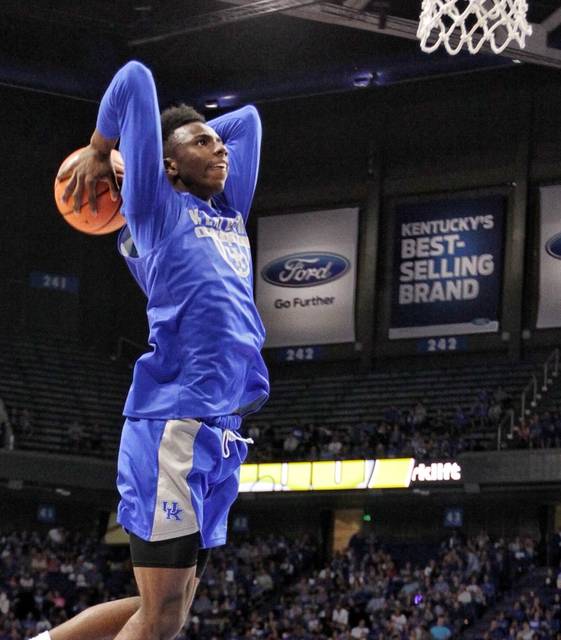 LEXINGTON (KT) — John Calipari is counting on his latest freshman class to carry the load for Kentucky this season.

Four of those newcomers shined for the Wildcats in the team’s annual Blue-White scrimmage Friday night at Rupp Arena. Kevin Knox and P.J, Washington combined for 43 points to lead the Blue squad to an 88-67 victory over the White team as 15,530 attended the first of four scheduled exhibition games.

Knox led all scores with 22 points and played both halves for Kentucky, which was without Jarred Vanderbilt and Jemarl Baker. Vanderbilt injured his foot during the first week of practice and is expected to miss the first three months of the season. Baker has been hampered by a bad knee. Calipari said he expects to have an injury update on Vanderbilt was early as next week.

Because of injuries, five players were on the court 35 minutes or more, with Knox, Sacha Killeya-Jones and Brad Calipari logging a full 40 minutes. Quade Green, Hamidou Diallo and Nick Richards spent time on the bench in the second half because of cramps.

Calipari wasn’t happy with his team’s lack of conditioning and promised a two-day practice session Saturday.

“When they (the players) saw one guy grab his leg, they all grabbed their legs,” he said.

Like his coach, Washington said the team’s conditioning was a downfall in the exhibition opener.

“A lot of guys were cramping because they played so long,” Washington said. “I feel like we just need to get into shape a little bit more.”

“I don’t think a lot of coaches would be pleased with their players cramping,” he said. “That comes with the game and it’s nothing we can control. We need to get in a lot better shape and we will be better down the road.”

In the opening half, Knox led the Blue team with 18 points, followed by Washington with 16. Knox was nearly flawless and made eight of 10 field goals. Washington followed Knox with 21 points. Knox and Washington played exclusively for the Blue team while the others played for both teams.

Although pleased with Knox’s performance, Calipari wants to see him become more assertive, especially on the glass.

“He kind of does what Malik (Monk) would do,” he said. “If I didn’t call something for him, sometimes he would just be out there and go five minutes and not shoot it. He needs to be alert to make plays, and I kind of got on him at halftime.”

Green, expected to be Kentucky’s starting point guard, finished with 15 to pace the white team, follows by Tai Wynyard and Sacha Killeya-Jones with 10 each.

Hamidou Diallo added 11 points and Shai Gilgeous-Alexander and Wenyen Gabriel followed with 10 points apiece for the Blue team. Green also played for the Blue team and popped a 3-pointer in the first half.

Although scoring wasn’t an issue, Knox promised the Wildcats would be in better shape within seven days.

“(We’ll) definitely get that fixed before next Friday,” Knox said. “(We’re) not going to slow down, because we have a lot of work to do.”

Diallo’s first appearance at Rupp Arena displayed his athleticism and one reason why he was a 50-50 prospect in the NBA Draft last summer.

Diallo threw down a towering two-handed dunk and added a nifty off-the-backboard pass to Washington for a dunk in the first half. Diallo combined for 15 points while playing for both teams.

Dragons rally for win over Pineville