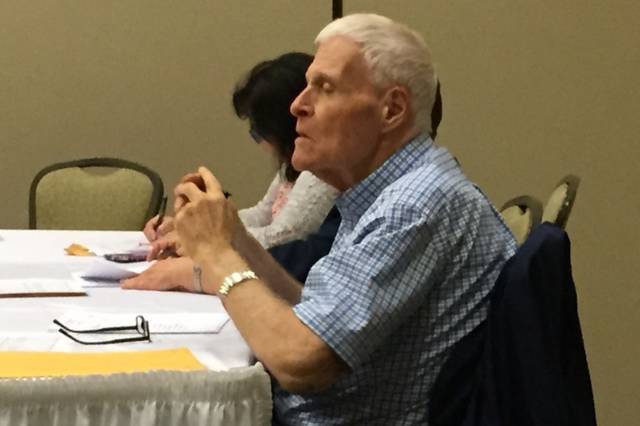 Harlan City Council member Grady Lee hears an issue with a city walking trail during a meeting on Monday.

The Harlan City Council met in regular session on Monday, discussing issues including damage to a walking trail and repairs at the sewer plant.

“They had corrected it, and they let the contractor use the walking trail,” Miller said. “I wrote them a letter asking they re-pave it. Hopefully that will get done.”

Miller said he would follow up on the letter.

“It was something that never should have happened, letting loaded trucks use the walking trails,” Miller said.

Miller also reported the county would be receiving bids on a small sewer project in the Brookside area. He said the area had been previously bypassed due to an issue with the main line.

“They will be taking bids on that in November,” Miller said. “That will add maybe 20 residents.”

Howard informed the council of a complaint from a Woodland Hills resident.

“When the construction ended where we put that big culvert in, (The company that performed the work) said they would put that blacktop back before winter last year,” Howard said.

Howard explained the area has yet to be repaved. He said he will attempt to get the work done as soon as possible.

The council then moved on to the Mayor’s report.

Howard updated the panel on an issue with a piece of equipment at the city’s sewer plant. He said the equipment in need of repair was in a place where a gasoline powered welder was required.

“We did have to purchase a welder,” Howard said. “I had been able to borrow one the last time this particular piece of equipment broke…the gentleman I borrowed it from sold it.”

Howard the city now owns a gas welder which can be used for other jobs, including securing manhole covers.

“We now have the ability to tack down the manhole covers,” Howard told the panel. “We went through a period of time where people were stealing our manhole covers and taking them to recycling places and selling them.”

• The council approved the minutes from the previous meeting;

• The financial report was approved.

SKCTC ranked among best in nation