Peas might replace cabbage, but there’s no substitute for Bible 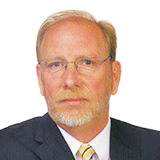 My old friend Harold Wainscott told me about two elderly ladies catching up on things after having not seen each other for some time.

After inquiring about one another’s health, one asked the other how her husband was doing.

“Oh, he died last week,” she answered. “He went to the garden to get a cabbage for dinner, had a heart attack, and fell dead right there among the vegetables.”

“I opened a can of peas, instead,” she replied.

Harold always enjoys sharing incredible stories that he can tell in a very matter-of-fact manner, even though they are anything but matter-of-fact. I’m sure you’ve noticed that the Bible often does the same thing, relating facts without the sensationalism that’s so common today.

I could only imagine the verbiage that contemporary writers might have tried to employ to convey the creation story. In their minds, such a momentous happening would demand lots of words. Here’s how the Bible puts it: “In the beginning, God created the heaven and the earth” (Genesis 1:1).

There was no long, breathless explanation. God did it. Enough said. The Bible contains neither verbosity nor sensationalism. Yet it is the best-selling book of all time.

The Bible explains that God said let there be light, and there was light, that he created the oceans and dry land, that he put the stars in their places, that he created animals and fish, and that, of course, He created Adam and Eve. The details of six incredibly amazing days were laid out very practically and efficiently in roughly 30 sentences.

The Bible is indeed incredible. It was penned by 40 different authors who were divinely inspired by God. These authors represented all walks of life, including shepherds, tent-makers, physicians, fishermen, priests and kings, who, used by God, created a perfect treasure of divine instruction.

As Southern Baptists point out, the Bible has God for its author and salvation for its end. It is altogether true and trustworthy, without any mixture of error whatsoever. The Bible reveals the principles by which God judges us. It is the supreme standard by which all human conduct, creeds and religious opinions should be tested.

“All scripture is given by inspiration of God, and is profitable for doctrine, for reproof, for correction, for instruction in righteousness” (2 Timothy 3:16).

While the lady in Harold’s humorous tale might have replaced peas for cabbage, there is no substitute for the Bible.

Why did Jesus Christ die?