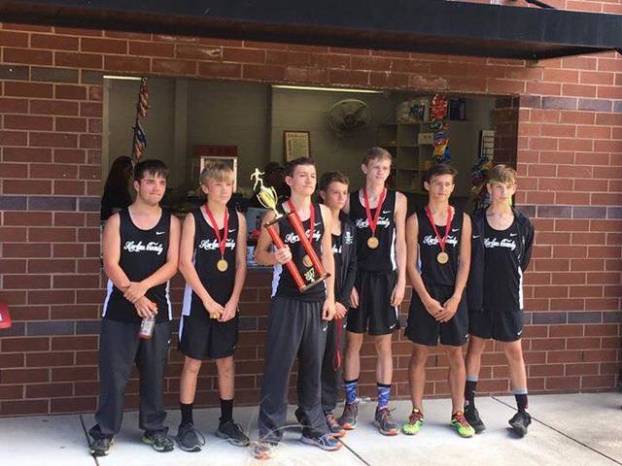 The Harlan County Lady Bears’ streak of Area 9 cross country titles will come to an end one day – but that day isn’t here yet.

“This is a big accomplishment for these kids. It’s been a challenging season for us, all due to things outside our control, but they’ve worked hard all year and they’re seeing the benefit of their work,” Harlan County coach Ryan Vitatoe said. “We really appear to have turned a corner with how we’re racing.”

“Lucy is a stronger runner than she was this time last year,” Harlan coach Tara Bryson said. “She is getting older and becoming a more confident runner.”

The boys squad also won the Area 9 title, their fourth in a row, handily defeating Letcher County Central behind a breakout performance by Josh Lee. The junior won the race by more than a minute, posting a time of 18:13.25.

“Josh ran a fantastic race. I’ve been waiting on him to bust one. I could see it coming, and he certainly picked the right day to let one go,” Vitatoe said.

“I give a ton of credit to Breezy, Josh and Alex,” Vitatoe said. “They have turned up their intensity, and it’s carried through the team. For these seniors, I can’t think of a better way for them to close their career at home. They’ve worked so hard for four years, and it’s a great accomplishment to cap it.”

“Our boys have yet to run in a meet five strong as a team, but our goal is to bring them all together Oct. 28 at the regional meet in Wayne County and qualify for state,” Bryson said.

The Bears came in second, five points behind Whitley County, in the invitational scoring. The Colonels were led by Jackson Estes, who finished second with a time of 18:49.59.

“I can’t say enough about Laura,” Vitatoe said. “From where she started four years ago to winning the JV race today – it’s proof that hard work pays off. She’s the epitome of discipline and determination, and we’re a better program because of her contributions.”

Harlan’s Makenna Jackson and Jackson Huff were the top local competitors in the middle school races. Jackson finished fourth in the girls race with a time of 15:51.25. Emma Owens (16:47.88) and Mia Pace (17:12.81) came in sixth and seventh, respectively.

The Black Bears return to action Saturday in Lexington.

In other action, both Harlan County and Harlan participated in a varsity-only meet at Bell County.