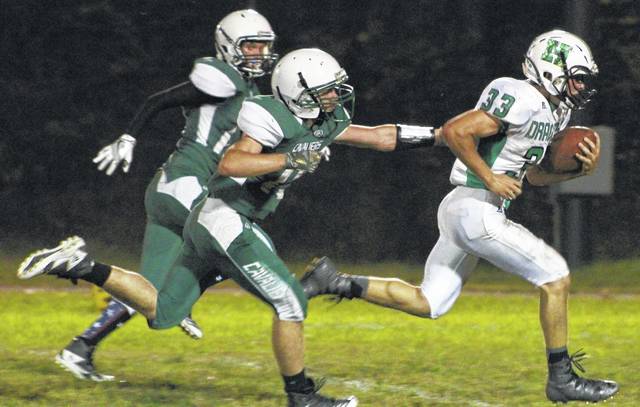 JENKINS — With eight Dragons contributing points and six reaching the end zone, Harlan spread the fun around Friday in a 62-0 rout of an outmanned Jenkins team that has been outscored 336-24 in six losses to start the season.

Harlan (2-4) put the memory of a four-game losing streak to start the season to rest with its second straight blowout victory that featured touchdowns on the ground, through the air and on defense in a dominating team effort. The Dragons spent most of the night in the Jenkins backfield, limiting the Cavaliers to a whopping negative 46 yards on 14 carries in a game where a running clock started midway through the second quarter and was over in less than 90 minutes.

“I told them that tonight they are competing against themselves and they need to try and make themselves better,” Harlan coach John Luttrell said. “I was proud of them and thought they did a great job.”

Harlan scored on eight straight possessions, needing only three plays to reach the end zone on its first two drives. Kilian Ledford found Will Varner or a 24-yard touchdown on the first drive, then added the extra point. John Brady Brock went 15 yards on the second drive, and Varner made it 15-0 when he took a fumbled snap in for two points.

Brock reached the end zone again on the Dragons’ third possession as he raced 58 yards. The extra point failed and Harlan led 21-0 after one quarter.

Jacob Howard went 50 yards for a touchdown in the second quarter, the first of four Harlan TDs in the period. Jarrett McKenzie took back a pair of interceptions for scores, the first was 15 yards and the second covered 25. Varner caught a 20-yard touchdown pass from Ledford between the two McKenzie picks.

Freshman Ethan Clem pushed the Harlan lead to 55-0 in the third quarter as he went in from the 20. Ledford followed with his third extra point.

The Harlan defense picked up its third touchdown late in the third quarter as freshman Braydon Shanks pressured Lance Bentley into a fumble that Jordan Howard scooped up and returned 25 yards for a touchdown. Ledford’s extra point closed the scoring.

Harlan will be open next week before opening its district schedule at home against defending champ Williamsburg. Jenkins plays at Hannan, W.Va., on Friday.

“I think it’s wide open,” Luttrell said of the Class A district race. “Williamsburg has lost a couple of kids to injuries. I think if we can continue to improve we can win. I told them who prepares the best and brings their A game will win the district. If they can put another district sign up there those first four weeks will be a distant memory.”