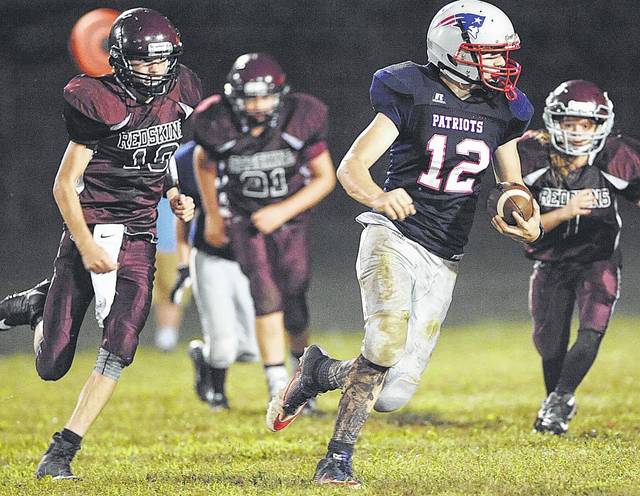 Three weeks after blowing a 10-point lead in the fourth quarter in a 32-28 loss at home to New Harlan, the Cumberland Redskins found themselves in a similar position in the rematch Tuesday at the James A. Cawood field.

There was no comeback this time as Cumberland reeled off 20 straight points in the first half on the way to a 28-14 win.

New Harlan struck first with a long, ground-oriented drive featuring runs by Timothy Bailey and Cullen Whitaker to set up Tanner Griffin’s 1-yard touchdown run. Whitaker added the two-point conversion for an 8-0 lead with 4:49 left in the first quarter.

The Patriots stopped Cumberland (2-5), with the help of a Thomas Jordan tackle for loss, and forced a punt. Bailey touched the ball when it bounced near him and Donovan Simmons picked up the loose ball and raced 50 yards for a touchdown. Simmons added the tying two-point conversion with 3:19 to play in the opening period.

Jonah Swanner picked off a Whitaker pass late in the first quarter, then found Jaedyn Gist for a big gain on a halfback pass to set up a 5-yard touchdown run by Brayden Blakley. Bailey stopped Swanner on the two-point conversion attempt.

Simmons went 10 yards for a touchdown late in the first half to push the Skins’ lead to 20-8.

Whitaker scored on a 2-yard run for the 2-6 Patriots with 2:20 left in the third quarter.

Swanner scored the final touchdown of the game on a 60-yard run. Swanner also tacked on the two-point conversion.

Cameron Anderson supplied much of the offense and the Cumberland defense came up with a goal-line stand in the fourth quarter as the Redskins won 14-6 in fifth- and sixth-grade action to improve to 5-1 on the season.

Dionta Long teamed with Anderson for a 70-yard touchdown pass in the first quarter as the Redskins took a 6-0 lead.

Noah Brewer went 34 yards around the right side for the tying touchdown late in the first half after quarterback Samuel Henson picked up a first down on a fourth-and-long play. The drive was set up when Darren Alred recovered a fumble forced by Bryan Howard.

Anderson put the Redskins back on top with a 50-yard run at the 1:42 mark of the third quarter. Long went in for the two-point conversion.

New Harlan (4-3) put together its best drive after that as Henson teamed with Alred for 20 yards, then followed with a 12-yard run. Brayden Hensley went eight yards for a first down on the Cumberland 15. Two procedure penalties moved the ball to the Cumberland 5 before New Harlan followed with two penalties. The Redskins recovered a Brewer fumble to end the threat.

Anderson picked up three first downs as the Redskins ran out the clock.

Harlan lost 30-0 to visiting Pineville in seventh- and eighth-grade football action Tuesday at Harlan. Pineville won 22-6 in the fifth- and sixth-grade game. Nate Montanaro scored the touchdown for the Dragons.

The Dragons will travel to Williamsburg on Saturday.