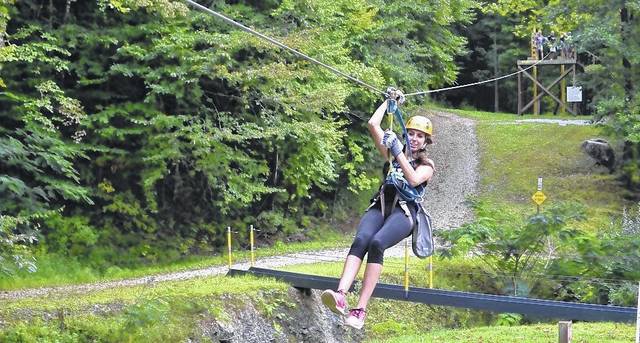 Not every girls basketball player in Kentucky gets a visit from University of Kentucky coach Matthew Mitchell.

Harlan County High School’s Blair Green gave her future coach an adventure he won’t soon forget on his trip last weekend, a ride on the Black Mountain Thunder zipline in Evarts followed by dinner at the Corner Cafe.

“He was very impressed and was getting a little nervous on me,” said Green. “He said, ‘I don’t know about this ziplining thing.’ I wasn’t sure if it was going to happen for a minute.”

Green, a senior guard who earned all-state honors last year, committed to UK last fall and went on to have another big season, leading the Lady Bears to a 28-3 record that included 52nd District Tournament and WYMT Mountain Classic titles and a 13th Region runner-up finish.

Harlan County coach Debbie Green and assistant coach Elgie Green, Blair’s parents, also made the trip to Evarts and showed Mitchell around HCHS, still one of the state’s nicest and most modern facilities in its 10th year.

“Although coach Mitchell has watched Blair all over the country he hasn’t been in our high school, so we also took him around Harlan County High School and our athletic facilities. He was just amazed with our school and thought it was no doubt one of the best he had ever seen,” said Debbie Green.

Green will have her official visit with University of Kentucky on Sept. 21-24 and she’ll sign her letter of intent papers on Nov. 15 during the first signing period.

“It was great having coach Mitchell here,” Crider said. “He was very likeable and was a good zipline rider. He seemed to really have a good time.”

Crider and the others at the park are becoming accustomed to having celebrities in town. Actor Channing Tatum and television personality Ian Johnson visited earlier this summer.

The park is open seven days a week, according to Crider. Tours are conducted by reservation between 9 a.m. and 5 p.m.