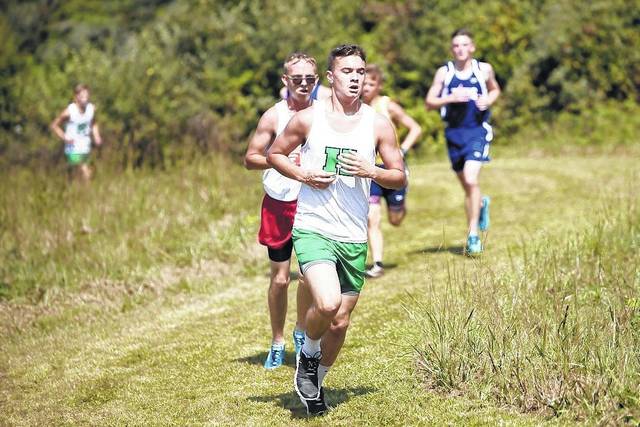 Harlan’s Tate Bryson headed up a hill during a recent meet in Corbin. Bryson led the Harlan runners in the race.

The Lady Bears finished fifth as freshman Abby Vitatoe and sophomore Zoie Wilson both went down with injuries during the race. The team was already without the services of junior Katie Graham and sophomore Madison Roark due to injuries.

“We have to get more consistent on the girls side,” coach Ryan Vitatoe said. “We saw today some of the top teams in our region, and how far we have to go. We will keep working, but we have to be hungry to improve on both sides, especially in this new region, if we want to achieve our goal.”

One of the Lady Bears’ new Class 3A Region 7 rivals, North Laurel, won the race by tiebreaker over the host Lady Hounds. Middlesboro and Williamsburg also finished ahead of Harlan County.

“Cadence ran a good race today,” Vitatoe said. “She’s still learning how to race, but she has a very high ceiling.”

“The boys had a good day today. Alex ran one of the best races of his career, and Josh (Lee) and Caleb (Brock) were both great,” Vitatoe said. “We’re still trying to find our fifth guy, but I thought all three of our junior high guys took steps in the positive direction.

“For us, it’s about closing out the last mile. We’re going to keep working on it, but we have to get better in the last mile to reach our goal.”

Abby Sherman finished 38th in the girls race with a time of 11:07.37. Kaydie Coots finished approximately 30th, but her official place and time were not available due to a clerical error.

Harlan County will travel to Wayne County on Saturday.