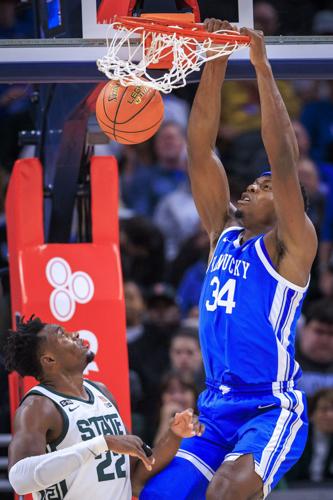 Despite the return of Oscar Tshiebwe, Kentucky fell to Michigan State in double overtime. (Photo by Jeff Houchin/Kentucky Today)

Oscar Tshiebwe made his first appearance of the season and made an immediate impact in the State Farm Champions Classic Tuesday night.

The Kentucky senior scored 22 points and grabbed 18 rebounds, but it wasn’t enough to keep the Wildcats undefeated. Michigan State used two overtimes to hold off No. 4 Kentucky 86-77 at Gainbridge Arena.

“I just saw (coach) Tom (Izzo) in the hallway, and I said you were more prepared to finish than we were,” Kentucky coach John Calipari said.

The Wildcats (2-1) lost to Saint Peter’s in the same venue in the opening round of the NCAA Tournament last year, and recent struggles in the Champions Classic continued for Kentucky, which is 1-5 in its last six appearances in the neutral-site event.

Tshiebwe had missed the first two games and all of the preseason while recovering from minor knee surgery. Tshiebwe didn’t start against the Spartans but ended up playing 34 minutes before fouling out with 32 seconds remaining in the first overtime.

A three-pointer by Cason Wallace early in the second overtime at the 3:39 mark gave the Wildcats a 76-73 lead, but the Wildcats managed just one point the remainder of the contest.

Sahvir Wheeler, who scored six points in the first extra period, followed Tshiebwe with 16 points and eight assists. Wallace finished with 14 points to go along with eight steals and five assists, while Jacob Toppin chipped in with 10 points.

The Spartans were paced by Joey Hauser, who sank four of the team’s seven 3-pointers and finished with 23 points. Hauser added eight rebounds.