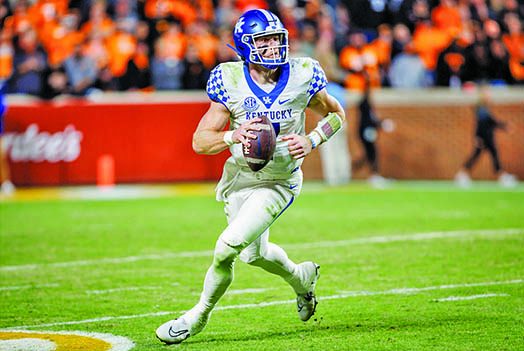 Kentucky quarterback Will Levis played one of his worst games of the season, throwing three interceptions in UK's nightmare 44-6 defeat in Knoxville. (UK Athletics Photo)

Kentucky had two weeks to prepare for Tennessee. It wasn’t nearly long enough to slow down the nation’s top-scoring offense Saturday night.

The Volunteers showed no signs of letting up two weeks removed from a 52-49 upset of then-top-ranked Alabama, No. 3 Tennessee (8-0, 4-0 Southeastern Conference) kept its perfect record intact with a dominating 44-6 win over the 19th-ranked Wildcats at Neyland Stadium. It marked the first time the two border rivals have played as ranked opponents since 1951.

“(We were) not very good,” Kentucky coach Mark Stoops said. “We got beat by a better football team, and they beat virtually in every area — out-coached us, outplayed us, and they’re a very good football team. You’ve got to come in here and play as good as you can in every area to expect to compete with a team that’s Top 3 in the country and we didn’t do that tonight.”

It has taken Tennessee coach Josh Heupel just two years to transform the Volunteers into a national title contender.

Just two years ago, the Wildcats marched into Big Orange Country and defeated the Volunteers in Knoxville for the first time since 1984. However, this time it was just like old times for Tennessee., which owned a 26-game winning streak over the Wildcats from 1984-2011.

Coming off a bye week, Kentucky couldn’t keep pace with the Volunteers, who are off to their best start since winning the national title in 1998. Going into the final month of the season, Tennessee has defeated five ranked opponents, giving the Volunteers an impressive resume for the College Football Playoff Committee to consider when it releases its first rankings of the season on Tuesday.

Kentucky (5-3, 2-3) has lost three of its past four games and is scrambling for a sixth victory for bowl eligibility with four games remaining starting next week at Missouri, followed by home games with Georgia, Vanderbilt and Louisville.

The Wildcats needed a flawless effort to pull off a possible upset, but continued letdowns on special teams — missing an extra point attempt and botched a punt before the half — coupled with inconsistency on offense (dropped passes and an interception in the end zone) was part of the team’s shaky performance on Rocky Top.

“We didn’t make plays,” Kentucky offensive coordinator Rich Scangarello said. “We were really poor on third down, and we turned the ball over. To beat a team like this on the road, we need to play our kind of game and have to be really efficient on third down and no turnovers. … it was the opposite of how we played against Mississippi State (two weeks ago).”

Tennessee opened and closed its scoring in the first half with mirror-image touchdown passes from Hendon Hooker to uncovered Jalin Hyatt, the latter a 31-yard scoring strike from Hooker to Hyatt that gave the Volunteers a 27-6 lead at the break.

UK quarterback Will Levis struggled and completed just 16 passes for 98 yards and three interceptions. It was an outing similar to his showing in a 31-17 loss at Mississippi State last year in Starkville. Levis said his first interception was a “big momentum changer.”

“We score there, and I think the game could have been a lot different,” he said. “That’s just football. Things like that happen sometimes.”

Kentucky running back Chris Rodriguez finished with 64 yards and scored the team’s lone touchdown in the first quarter.