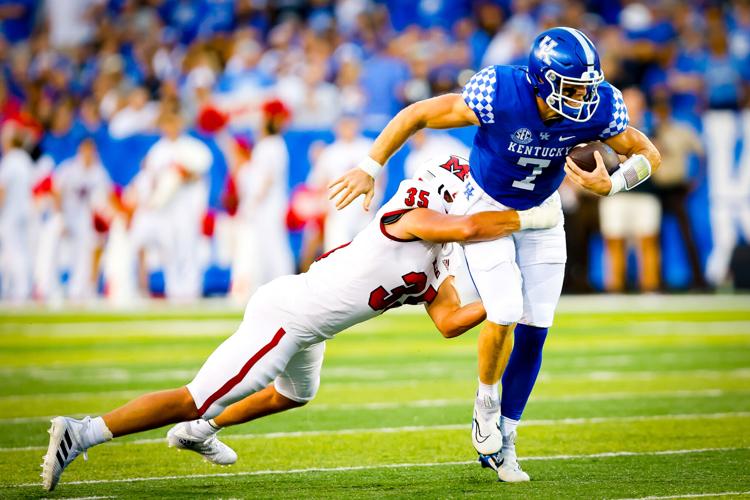 Mark Stoops is one win away from becoming Kentucky’s all-time winningest football coach.

A decade after the No. 20 Wildcats defeated Miami of Ohio to give Stoops his first victory as a collegiate head coach, Kentucky knocked off the Redhawks again 37-13 on Saturday night, tying Stoops with the late Paul “Bear” Bryant in career wins with 60. He can surpass the record with a victory at Florida next week.

“I am grateful to win that many games, to be here this long and we have a long way to go,” Stoops said afterward. “I’m excited to keep building this program.”

As has been typically the case against teams from the Mid-American Conference (MAC), Kentucky needed time to produce a wide margin between the two teams. Following an impressive first drive that began with a 45-yard strike from Will Levis to Virginia Tech transfer Tayvion Robinson on the first play from scrimmage, the Wildcats produced just two field goals the remainder of the half and led 13-10 at the break.

In his debut as offensive coordinator, Rich Scangarello relied on Levis and the passing game to offset the absence of senior running back Chris Rodriguez, who sat out the opener because of a suspension that was related to off-the-field issues during the off-season.

The Wildcats collected just 50 yards rushing with the rest of the 353 total yards coming through the air. Although struggles were anticipated in the opener, Stoops wasn’t pleased with the four sacks allowed by the offensive line.

Levis threw for 303 yards and three touchdowns and the addition of Robinson provided Levis a cushion downfield. Robinson hauled in six passes for 136 yards against the Redhawks. Robinson also was dynamic on special teams and finished with 161 all-purpose yards.

“Tayvion did not surprise me because I’ve seen it (and) I’ve seen him elevate his game in scrimmages where he’s really shown out,” Stoops said.

Robinson enjoyed his first outing with the Wildcats.

“I came here to be a playmaker,” he said. “Will has a great arm and delivered.”

The Levis-Robinson combination provided a lift, but the spark the Cats needed came from freshman Barion Brown to open the second half.

In the first big play of his collegiate career, Brown’s 100-yard kickoff return for a touchdown on the first play of the second half gave the Cats the boost they needed to overcome Miami, the preseason favorite to win the Eastern Division of the MAC. A fumble recovery led to another touchdown by the Wildcats on the ensuing possession.

“That was a huge momentum switch in the game,” Levis said of Brown’s kickoff return. “We’ve got to the ball in his hands as much as we can throughout the season. He’s a playmaker.”

While the opener was an overall success, issues on the offensive line were exposed, especially on the left side of the line. Those are areas of concern the Wildcats will need to address going into Saturday’s Southeastern Conference opener at Florida, Stoops said.

“We need to be more excited who we are and play with that chip on your shoulder and the attitude,” he said. “You never know whether it’s just business-like or going through the motions. And at times today, even with the good victory, it just didn’t feel like the edge of the attitude and the chip on your shoulder was there all the time. So we need to learn from that.”