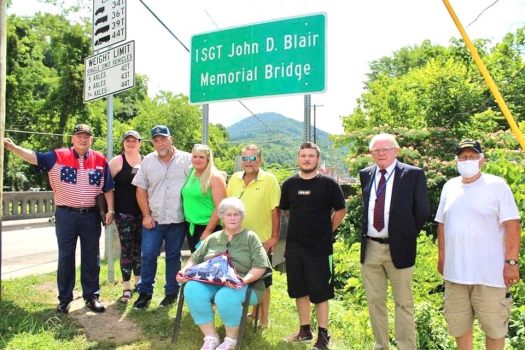 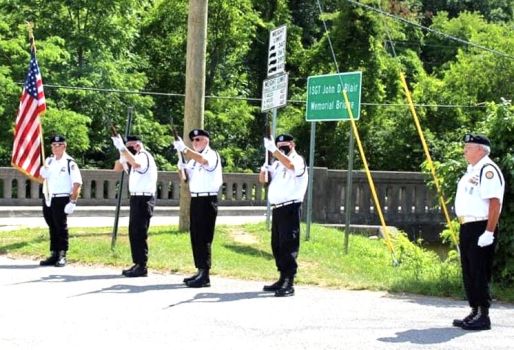 Family and friends came together in memory of a local veteran who was killed in action during Operation Enduring Freedom, otherwise known as the Global War on Terrorism that lasted from Oct. 7, 2001, until Dec. 31, 2014, when President Barack Obama announced its end in Afghanistan.

Signs were placed at the bridge next to Food City in Cumberland with John T. Dodd (Ret. Army), chairman of the Board to Preserve Military Heritage in Harlan County, conducting the ceremony. The Harlan Honor Guard also performed military rites.

Blair was a 1990 graduate of Cumberland High School before his move to Georgia.

Blair, who had been living in Calhoun, Geo., served as a full-time sheriff’s deputy from June 1994 until Aug. 1998 before leaving the Sheriff’s Office to assume full-time duties in the Army National Guard in Lawrenceville. He was assigned to Company A in the 1st Battalion, 121st Infantry Regiment.

Blair served in the National Guard’s counter-drug operation as a reserve deputy sheriff from October 2006 until December 2008 when his unit was mobilized for duty in Afghanistan.

After being shipped overseas to serve during Operation Enduring Freedom, Blair suffered injuries sustained when a rocket-propelled grenade struck his vehicle. He died in Mado Zayi, Afghanistan, on June 20, 2009.

He has been awarded multiple ribbons and medals, including the Bronze Star, Purple Heart and the Army Commendation Medal.

Blair’s family and friends described him as having a tough outside, but soft inside, and a love for hunting and fishing.