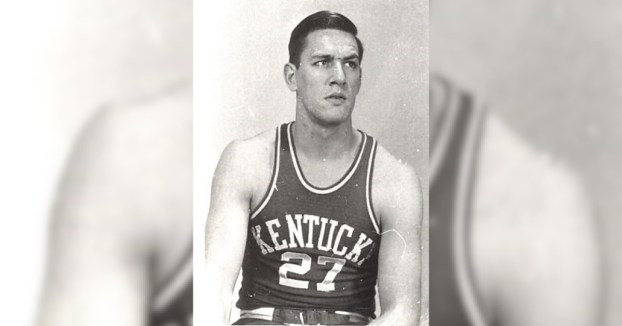 (Editor’s Note: During our national COVID-19 crisis, longtime sports columnist Jamie H. Vaught will be writing about the ex-Wildcats who were featured in one of his first four books on UK basketball, using excerpts that were published in his out-of-print volumes. His latest and fifth book, titled “Chasing the Cats: A Kentucky Basketball Journey,” was released in late February 2020.)

It has been over 70 years since Wah Wah Jones starred at University of Kentucky and he is still well-known as sports legend these days even though he passed away in 2014 at the age of 88.

As you may know, Jones  who played basketball at Harlan High School with four trips to the state tournament, including one championship  is perhaps the greatest all-around athlete UK has ever produced in its storied history. A three-time All-American who was a member of UK’s 1947-48 Fabulous Five hoops squad for coach Adolph Rupp, the 6-foot-4 Jones also played football as a receiver for coach Bear Bryant, earning two All-SEC honors. In addition, Jones played baseball and ran track at UK.

And I had a fascinating interview with Jones in Lexington for my first book, “Crazy About The Cats: From Rupp To Pitino,” which was published in 1991. If I remember correctly, we held the interview at the Campbell House Inn on South Broadway.

Jones shared some Rupp and Bryant stories. He said the Baron wasn’t too thrilled about him getting involved in other sports at Kentucky.

“I always felt like Rupp didn’t want me to play football,” said Jones, whose wife Edna Ball, was from Middlesboro. “But he couldn’t say anything about it. The people knew we needed some more football players and they knew I could play football so the people kind of kept him from demanding that I just play one sport.

“Coach Bryant liked to have me out there and he didn’t mind me playing basketball. Coach Bryant also went so far as to let me play baseball. A lot of football coaches want you to have spring training. But we had one of the assistant football coaches who was the baseball coach and Bryant was trying to help him in getting enough players to have a baseball team. So, he was very good to me and I got along really well with Bryant. It didn’t bother me playing all three sports.”

Rupp and Bryant were similar as far as their coaching personalities were concerned.

“There wasn’t a whole lot of difference (between them),” said Jones, a three-year NBA standout who later became the only UK athlete to have his jersey retired in basketball and football. “They were both demanding that you do it the right way and give all you’ve got 100 percent. I always did that so I got along real well with both of them.

“With Coach Rupp being the legend he is and Coach Bryant the legend he is, and being named All-American (and All-SEC) under two legends, I’m the only guy who could ever say that. It’s a real good feeling.”

During a football game when the Wildcats visited Cincinnati, Jones saw himself with a bloody mouth when he chased the Bearcat quarterback.

“I had been sacking the quarterback and they put in a substitute who was a little quicker than the other one. He caught me in the mouth with his elbow and kindly knocked my tooth loose,” remembered Jones. “I was bleeding. So I went over to the sidelines and was standing there by Coach Bryant. Then something happened on the play and he wanted me to go back in and I said something about my teeth in mouth and bleeding.”

Bryant, like a tough Marine drill sergeant, ignored the player’s excuse and said, “Well, go in there, you don’t run on your teeth.”

Jones, who along with his Fabulous Five teammates helped the U.S. squad capture a gold medal in the 1948 London Olympics, recalled a Rupp story when Kentucky had a very comfortable lead at the intermission. But Rupp was still mad as heck in the locker room.

“We were beating the team real bad and he was trying to get us to keep on going and keep our attention,” Jones commented. “I think the other team only had about six or eight points at halftime. So, Coach Rupp gets in there and gets his scorebook. He asks us who is guarding the player (who had four points).

One of the Wildcat players raised his hand and said, “I am, coach”

Rupp shouted back, “You are going to have to get on him. He’s running wild.”

On Rupp, Jones said the “Man in the Brown Suit’ was sometimes hard to figure out.

“He would come out with some pretty good language every now and then,” said Jones, who once served as the sheriff of Fayette County. “You would always wonder what he was going to say when he got in the dressing room. And here we’re winning real easy. He was a great motivator and he wanted you to get the job done.”

On his nickname, Jones said, “My younger sister couldn’t pronounce the name of Wallace so she got the words ‘Wah Wah’ out and the local sportswriter picked that up when I was in grade school and used it in the newspaper, the Harlan Daily Enterprise. So, they got that started and it just kept on going. It has been with me all the time and we kind of got it shortened to a little bit. Now everybody calls me ‘Wah.’

“My wife calls me Wallace. Coach Bryant called me Wallace. Those are the only two people I know that I can remember who call me Wallace.”

Rupp didn’t call the player ‘Wah Wah,’ either. What did the Baron call him?

From KHSAA With the announcement yesterday of the recommended closure of all K-12 schools to in-person instruction throughout Kentucky for... read more