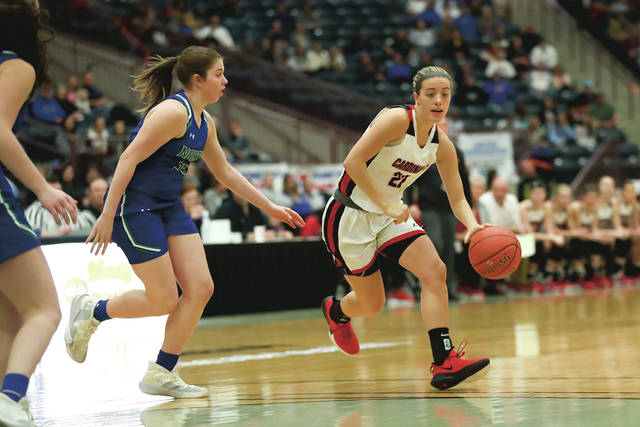 The game lived up to its hype before seeing South Laurel pull away midway through the second half. The Lady Cardinals (26-6) used a 30-15 run during the second half to put the game out of reach.

“It was a real battle in the first half and both teams seemed to have an answer for everything,” South Laurel coach Chris Souder said. “We had to get out of the press early because they destroyed us on it, so we adjusted, and were able to do some things better. We were able to get into a half court defense and do well. I didn’t think we rebounded the ball well in the first half, but we were able to adjust to that, too.”

North Laurel coach Eddie Mahan said he was pleased with his team’s effort throughout the contest but felt his team ran out of gas during the second half.

“I thought we just wore down,” he said. “We made some mistakes we don’t usually make. Coming into this game, I thought whoever shot the ball better would win and we just didn’t shoot well and they did. I give a lot of credit to South. They did what they needed to do to win.

“This is a tough loss but the future is bright. Now we have to put in the work. It’s one thing being a good young team but it’s another thing to be a really good varsity team. We have a long way to go but we will get there. It’s going to be a hard offseason for us.”

Run and gun was the theme for the first quarter with the two teams combining to score 40 points.

South Laurel was able to hit three 3-pointers with Hall leading the way with eight points while Collett added seven points to give their team a 21-19 edge going into the second quarter.

The Lady Cardinals were able to put some distance between themselves and North Laurel during the first six minutes of the second quarter.

Steele scored four straight points to open up the period to give her team a 25-21 edge at the 6:31 mark while Collett got the hot hand by connecting with two consecutive old-fashioned three-point plays to push South Laurel’s advantage to 36-27 with 3:09 remaining.

The Lady Jaguars closed out the half with an 8-2 run while cutting their deficit to three points (38-35) at halftime.

The Lady Cardinals connected on 15-of-28 shot attempts in the first half, including a 4-of-13 effort from 3-point range while the Lady Jaguars were 16-of-40 from the floor and 2-of-8 from behind the arc. North Laurel outrebounded South Laurel, 20-12.

Even though his team was clinging to a small lead, Souder said he was assured by Steele not to worry.

“It was a tight game at the half and Amerah (Steele) comes up to me at halftime and said, ‘Coach, we’ve got you.’ Our seniors are great,” he said with a smile. “They’ve stepped up and done that the entire season. Ally played well and had a great tournament and Sydnie Hall was really big tonight. She runs the offense well and knows where everyone is. This is just a fantastic win for these girls.”

South Laurel opened the third quarter with a 13-4 run behind the play of Steele and Clara Collins.

Steele’s 3-pointer at the 4:54 mark gave her team a 49-44 advantage while Collins connected with a 3-pointer and a layup to increase the Lady Cardinals’ advantage to 57-47 going into the fourth quarter.

Baskets by Presley, Collett and Steele to begin the fourth quarter triggered a 12-4 run that allowed the Lady Cardinals to wrap-up the regional championship.

South Laurel finished shooting 26-of-50 from the floor, including going 7-of-19 from behind the arc. They finished with 17 assists but were outrebounded, 37-29.

North Laurel struggled from the floor, hitting on only 25-of-72 shot attempts and 5-of-19 from 3-point range.

“This was huge for us,” Souder said. “A lot of times adversity and injuries will destroy you, but with us it seemed like everything that happened. We just continued to rally around one another. I honestly haven’t seen anything like it. This group of girls never wavered and it’s them because I really didn’t have to say too much. They responded the right way and I credit our seniors.

“Sitting the locker room last year, was the most devastated locker room I have ever been a part of. We got back and talked about it and we let it drive us. I’m just so super proud of our kids. I’m really happy with the way we handled everything.”