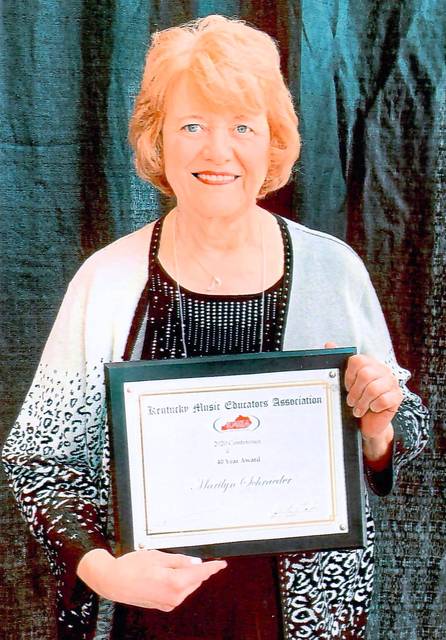 Harlan choir director Marilyn Schrader posed with her award that was presented to her on Feb. 7 during KMEA’s awards conference in Louisville. The award celebrates her 50 years of service, though she lightheartedly laughed at the misprinted “40 years” across its front.

Harlan choir director Marilyn Schraeder was honored for her 50 years of service during the Kentucky Music Educators Association (KMEA) 2020 Professional Development Conference Awards on Feb. 7 in Louisville. Music instructors from across the state were recognized with a variety of awards, including years of service.

Schraeder, who first began teaching in 1969 at Harlan Independent, was presented with a plaque at the event for her dedication to music and education. She is the current director of the Harlan Middle School choir, the Harlan Musettes and the Harlan Boys Choir.

“When the Musettes were first organized, they met one night a week at the Baptist church and then various homes,” Schraeder said reflecting on her years in music. “When I started directing them in 1969, we met twice a week after school and had sectionals once a week. Later it was incorporated into the school schedule.”

Schraeder is a lifetime member of the American Choral Directors Association, recipient of the Robert Baar Award, past KMEA All-State Chorus Chairman, past R & S chairman of KY-ACDA and secretary of SKMA and has accompanied the SKMA SATB All-Festival Choir for 48 years. She was also named the KMEA High School Teacher of the Year in 2014.

As part of the 32nd Annual East Kentucky Leadership Conference held in Benham, awards were given out as a way to recognize individuals or groups who demonstrate their leadership abilities throughout the area. The Benham School House Inn hosted the conference’s awards banquet on April 25, 2019, recognizing these individuals.

Of these individuals, Harlan natives David Davies and Schraeder were given the 2019 East Kentucky Leadership Private Individual Award. The award is given to recognize an individual whose private service is dedicated to the betterment of the region.

Davies is the founder and 45-year director of the Harlan Boys Choir and Schraeder the director for the Harlan Musettes. Both are well-known for their love and dedication to music and their students.