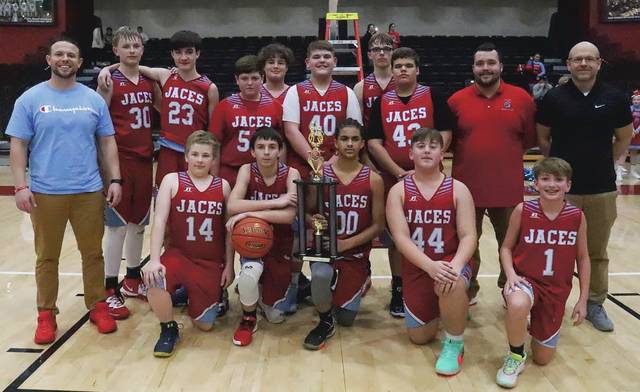 The James A. Cawood Trojans are pictured with the championship trophy after defeating Rosspoint 43-27 on Friday in the seventh- and eighth-grade county finals. The Trojans finished 20-3 overall and were undefeated against county competition.

On the brink of the first boys middle school county championship in school history last February, the James A. Cawood Trojans watched their hopes slip away in a 48-35 loss to Rosspoint in last year’s finals.

Redemption finally arrived Friday as the Trojans quickly erased any doubts about the eventual winner with an aggressive defense that took control early on the way to a 43-27 win over Rosspoint in a rematch of last year’s championship game.

“We talked all week about being focused and jumping on them early and not let them jump on us like they did last year. That really broke our backs to start the game last year,” James A. Cawood coach Kyle Jones said.

Ethan Rhymer scored 16 points and Jared Rhymer added nine for the Trojans, who improved to 20-3 overall and were unbeaten against county competition. The Trojans posted a 37-1 mark against county opponents over the past two years.

“A lot of people don’t realize how many games these guys have won the past two years. It’s pretty impressive what these eighth-graders have accomplished,” Jones said. “I’m real happy for all of them. They all played well.”

After Carter Howard gave Rosspoint a brief 2-0 lead, JACES reeled off 11 unanswered points and was never threatened after that. Ethan Rhymer hit a 3-pointer to put the Trojans ahead, then Jared Rhymer, Ethan Rhymer and Caleb Johnson all had baskets off turnovers. James McMillian and Jared Rhymer each scored as the Trojans’ lead grew to 17-5 after one period.

“Defense has been a strength for us all year. We’re real long and we have McMillian out front, and he is real active and real disruptive,” Jones said. “I talked to both of the Rhymers all week about being aggressive and if you have an open shot just take it, don’t think about it. They made a couple early and that got us rolling.”

The Rhymers each hit treys in a 10-0 run to open the second quarter, pushing the lead to 27-5. The Trojans led by 24 late in the period before two baskets by Samuel Henson cut the deficit to 31-11 at halftime.

Scoring slowed in the third quarter for both sides as JACES took a 37-16 lead into the final period. Ethan Rhymer led the Trojans with two baskets. Brody Napier had a three-point play for Rosspoint.

Connor Daniels and Ethan Simpson each scored nine points to lead the Devils.

Junior Sanchez scored 12 and Jonah Mumford chipped in with 11 for the Redskins.