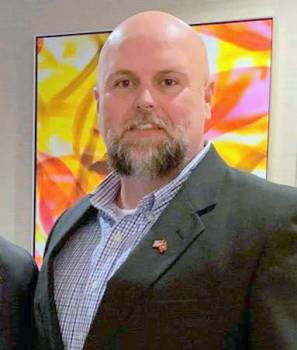 Two Harlan Countians will be in the running for the 29th Senatorial District in southeastern Kentucky, which represents Harlan, Letcher, Knott and Floyd counties.

The Republican candidate, Matthew “Macky” Wynn, said he is tired of seeing southeastern Kentuckians being fed the “crumbs that fall off the table” and “that time has come to an end.”

“The mountains of eastern Kentucky hold the bluegrass together,” Wynn said. “Our natural resources have been taken out of these mountains for 100 years with very little given back. Other counties and districts have flourished while we’ve been left behind. We are some of the most resilient, hard-working people on earth.”

Wynn said he loves the mountains he calls home, but it saddens him to “see the oppression that most of us don’t even recognize.”

“We have to move Kentucky forward, but that can’t happen by leaving the heart of Appalachia behind,” Wynn said. “Our workforce is plentiful with few jobs. The opioid epidemic, which we recognized almost 20 years ago, is just now on the main stage.”

He added the stigma of rural Appalachian people being uneducated and “stupid hillbillies” must change.

“By strengthening and broadening our education, we can,” he said. “The key to success for our children and grandchildren lies within the classrooms of our schools and in the workshops of our technical and trade schools and within our homes.”

Wynn is a combat veteran from both the U.S. Marine Corps and the Army National Guard. He was awarded the Combat Action Ribbon and the Combat Infantry Badge with the Marines and the Joint Service Commendation Medal with the Army.

Johnnie L. Turner, another Republican candidate, was elected as a representative from Harlan in 1999 and spent four years in the House of Representatives.

Turner said during his time in the General Assembly he ultimately rewrote the current workers’ compensation laws. He also wrote a four-wheel bill and succeeded in passing it and obtained the funds for all of Harlan County to have running water.

Turner spoke about the coal industry in an interview with the Enterprise, stating he would do his best to protect the coal miners and keep them afloat.

“There’s so many jobs from truck drivers, to tires, to fuel – it’s so connective to our community that I would do everything that I could to keep them going in some fashion and determine if there are something, legislatively, that you could do to help them in that way,” Turner said. “As a lawyer, I would look at the rules and regulations applying to make sure you didn’t have another Blackjewel incident where the money was not in place to make sure coal miners were taken care of.”

He added had that portion been in place, the company would’ve had money in the bank to pay their workers by a bond or by cash.

“The world is changing at a fast pace and everyone’s going to want to ask me what I will do with the budget deficit and the retirements,” Turner said. “I’ll do just like I did with the workers’ comp. I can’t tell everybody exactly what I will do, but I will go back into the history of it to see what caused the problem and then try to work with everyone to correct what the problem is.”

Turner said he tries to use his own expertise and do his own research before consulting with an expert so he could understand what they were saying and know how to ask the right questions to get the correct law passed.

Turner is the current school board attorney for the Harlan County School District and he practices law in his office in downtown Harlan.

He is a U.S. Army veteran, having served as a medic from 1967 to 1969. He believes in fighting for the Ten Commandments in schools and supports coal, as his grandfather, father and five brothers and nephews are all coal miners. He is also a lifetime NRA member, CCDW instructor/trainer and a hunter safety instructor of 20 years.

The filing deadline for the Kentucky State Senate is Jan. 28, 2020, with the primary election scheduled for May 19 and the general election for Nov. 3.