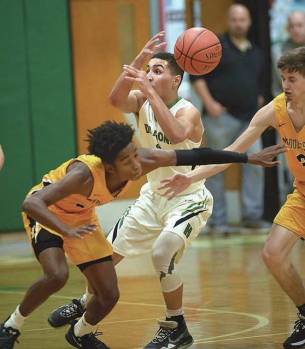 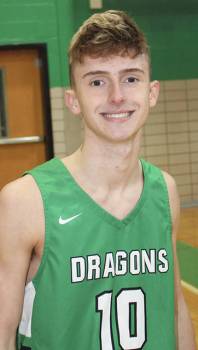 Charles David Morton will have quite the story to tell his grandchildren one day about the night he hit seven 3-pointers in his first varsity start at home, leading the Harlan Green Dragons to a 57-50 victory Friday over visiting Middlesboro.

The story is even more fascinating when you consider the circumstances, beginning with star guard Jordan Akal on the bench in street clothes due to an ankle injury that could sideline him for several weeks. Morton, a senior guard who had patiently waited his turn, stepped into the starting lineup for the first time on Monday in a loss at Lee, Va., that dropped the Dragons to 0-2.

With Akal out and three other starters from last year now gone due to graduation, the Dragons appeared to have very little chance of knocking off the Jackets, who beat them last year in the finals of both the 13th Region All “A” Classic and the 52nd District Tournament.

Morton, however, came out on fire with with three 3-pointers in the first quarter as Harlan jumped out to a 19-13 lead. He added two more in the second quarter as the lead grew to 37-22.

Harlan led by 17 early in the third quarter, but the story started to turn when Middlesboro reeled off 12 straight points to close within one by the end of the period. With Morton scoreless for the half, Middlesboro went on a 25-3 run extending halfway through the fourth quarter to go up by five.

Just when it seemed Morton and the Dragons would have to settle for a good effort in a loss, Morton found the range again with back-to-back 3-pointers to put Harlan up by one. Jaeden Gist added two straight baskets as Harlan went up by five on the way to the victory.

“It’s a credit to my teammates that they were looking to get me the ball,” Morton said after finishing off a 21-point effort. “It boosts your confidence big time to hit a few. We work hard every day and get up a lot of shots.”

“I’m excited and happy for him,” Harlan coach Derrick Akal said. “He has worked on his craft, so this is not a fluke. I think he was a little upset he didn’t make shots the first two games, but he came out here tonight and did his job.”

Jaedyn Gist scored 14 points and Kaleb McLendon added 10 as the Dragons improved to 1-2 overall and 1-0 in district action.

“We talked before the game that everybody else has to do their job. I told them if everyone does their job we’ll be fine, and everyone did their job,” Akal said.

Harlan had 10 turnovers in the third quarter as Middlesboro fought back behind senior guards Trey Brock and Jabari Kyle, who led the 1-1 Jackets with 18 and 16 points, respectively.

“When you lose your starting point guard, that’s where you see it with the turnovers we had in the third quarter,” Akal said. “We just needed to see the ball go in. As soon as the ball went in, our defense picked up and we started to get rebounds. Then they stopped making shots, and Jaeden (Gist) did a good job of pushing the ball.”