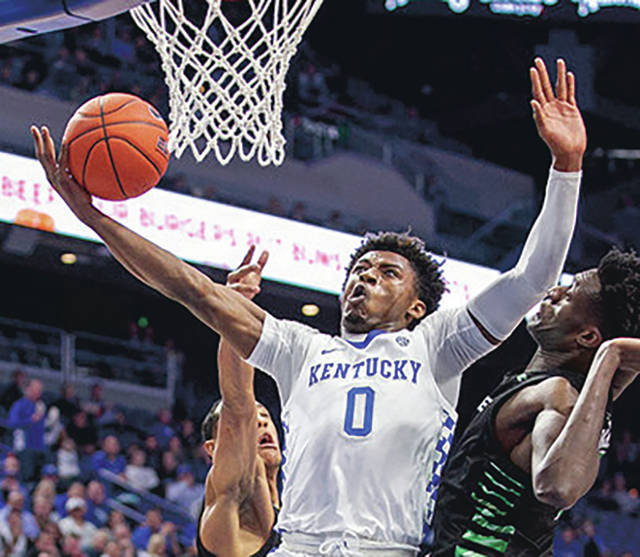 Hagans scored a carer-high 26 points to lead the ninth-ranked Wildcats to a 82-74 win over Utah Valley to help Kentucky survive its second scare in less than a week.

“(I’m) still feeling it a little bit, but it’s all good,” he said. “(I’m) going to go back and get some treatment, just keep getting with (trainer) Geoff (Staton) and get better.”

Coming off a 67-64 loss to Evansville that dropped the Wildcats eight spots in the latest Top 25 rankings, the Wildcats had to depend on veterans Hagans and Nick Richards to avoided another mishap four games into the season.

“It’s not too tough (playing with seven players),” he said. “We’ve got other guys who can step in and play their roles. Big Ben (Jordan) helping us out a lot, fighting with Nick (Richards), Riley (Welch) and Brennan (Canada) coming in and giving us the reps that we need. We all just trying to figure out our roles and trying to get better.”

Hagans has been battling a leg injury but consistent treatment has kept Hagans on his feet and the sophomore guard took advantage of several drives to the basket and was perfect at the free-throw line against the Wolverines. Hagans connected on all 12 of his free throw attempts and became the 15th player in school history to accomplish the feat with at least 12 attempts.

Hagans got some help from Richards who finished with 21 points and 10 rebounds, the second double-double of the season. Richards, whom Calipari called the team’s best shooter inside the arc, connected on eight field goals on 11 attempts.

“That’s the Nick that we need,” Hagans said. “He just has to keep on bringing it. You know Cal just kept on telling us to feed him and let him shoot the jumper, he had it and he was knocking it down, he just opened it up for us and he helped us out.”

The only disappointment for Richards was not getting a block on the defensive end of the floor.

“That is something that I am mad about,” he said. “I am disappointed in myself because I had a couple of opportunities to get a couple of blocks tonight. We just have to appreciate the win tonight and be grateful for that.”

Nick Sestina, also a veteran, tallied eight points and grabbed 12 rebounds, the most by any Kentucky player in a single game this season.

Ultimately Hagans took over and gave the Wildcats the boost they needed against a gritty Utah Valley squad down the stretch.

“Last year, coming in, I was just trying to figure out my role,” he said. “This year, just taking with coach (Calipari), he just let me know that this was my team and to be a leader, bring everybody together and just talk to them and go on to the next game.”