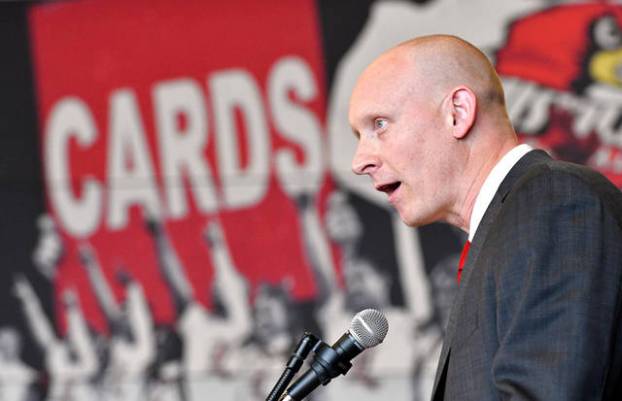 Chris Mack addressed the media after he was introduced as Louisville’s new head basketball coach during an NCAA college basketball press conference on Wednesday in Louisville.

Mack plans to build ‘something special’

LOUISVILLE, Ky. (KT) — Calling it an “opportunity of a lifetime” and describing it as an “awesome” job, Chris Mack was introduced to an enthusiastic crowd in the Spirit Room of the KFC Yum! Center late Wednesday afternoon as the coach chosen to lead Louisville’s basketball program back to national prominence from dark times.

Approximately 200 fans, former players and all returning members of the current team, along with Hall of Fame coach Denny Crum, greeted Mack with long applause when he and his family walked to the podium after the UofL board of trustees approved his hiring.

Mack, 48, comes to Louisville from Xavier, where he coached for nine seasons. He is only the third full-time Louisville coach in 47 years and just the fifth since 1944.

He faces a major challenge with a program that is just completing one year of a four-year NCAA probation period for a stripper/prostitute scandal, has signed no recruits for the 2018-19 season and could face further NCAA penalties in an ongoing pay-for-play investigation by the FBI.

But Mack insisted he’s up to the task.

“It’s time to turn to start building something special here again,” Mack said. “Dark clouds mean a lightning bolt is coming. I’m not going to make a lot of promises, but the one thing you will get is my very best. I don’t take this position lightly. I will work my (butt) off every day to make you proud of Louisville basketball.”

He urged fans to pack the Yum! Center “and get this place rockin’.”

Mack signed a seven-year contract worth $4 million annually that also includes incentives and a $6 million buyout.

Louisville athletics director Vince Tyra said if UofL were to receive probation from penalties incurred before Mack’s tenure began, his contract would automatically extend for as many years as the probation was in effect. Conversely, if Mack were to have any NCAA issues, “then we have the right for termination on that,” Tyra said.

Mack was Tyra’s main target from the outset of the coaching search. Mack’s teams at Xavier posted a 215-97 record, reaching three Sweet 16s and one Elite Eight. He earned 2016 U.S. Basketball Writers Association coach of the year honors and has also been named Atlantic 10 and Big East coach of the year. The Musketeers won the regular-season 2018 Big East title and were awarded the first No. 1 seed in program history.

Mack replaces David Padgett, who served as the Cardinals’ interim coach this past season after Rick Pitino was fired shortly before practice began last fall.

“Welcome to the future of Louisville basketball,” Tyra said in introducing Mack. “This is a new and brighter day. Chris Mack embodies the criteria that are key to honoring our past and embracing the future. He wants to be here, he loves everything about the city and this university, he represents the highest integrity in athletics and life, he’s a competitor and a proven winner, and he attracts talent both in his scholarship players and his staff.”

Mack said he had been offered other college coaching jobs over the years, but never one that was as attractive as the Louisville position, although he admitted it was a tough decision to leave his alma mater.

“When the opportunity came, it was one I felt like I couldn’t pass up,” he said. “No other opportunity has ever felt right. My heart was at Xavier and I would never have left if I didn’t think this place could shine again. I’m never afraid of a challenge and this is my final stop. You’ll never see Coach Mack coach at another college, in the NBA or in high school.”

Asked what he had been told about the FBI investigation, he replied “enough.”

“I don’t think people can get their heads around what’s going to happen and we’re all eager to see how it plays out,” he added. “But if I was scared, I wouldn’t have ever come here. We’ll deal with whatever comes our way and won’t be afraid of it.”

Mack met with the current Cards prior to the press conference and told them he wants a team that is “tough, together and unbreakable.” He said he will meet with the players individually over the next week or so.

“I want my team to be tough, both physically and mentally,” Mack said. “My vision may not match up with some of the current players, but I’m not going to lower our standards.”

The Cards, several of whom he had recruited for Xavier, seemed to have a positives first impression of their new boss.

“It was good,” freshman center Malik Williams said. “He came in not too hard and wanted us to get to know him, so that was big for us. As a coach, we do need to know him, we need to trust him, and he needs to be able to know us and trust us.”

Another freshman, Jordan Nwora, said he knew of no players who were planning on transferring.

“He’s had a lot of success at Xavier and he’s going to bring that here, we’re sure,” Nwora said. “He’s a great dude, great staff. It’s good to have somebody here for the long run and he’s going to have our backs. We’ll know what we have to do from here on out and there won’t be a lot of changes. All of us love it here and I don’t think that will change. He’s a great coach. So it’s good and we’ll see how it goes.”

On the recruiting trail

Mack wasted no time hitting the recruiting trail — by phone — and the first prospect he reached out to Tuesday afternoon was Romeo Langford (6-5), a five-star guard from nearby New Albany (IN) High School, who is still uncommitted but has narrowed his choices to Indiana, Kansas, and Vanderbilt.

Tim Langford, Romeo’s father, said Mack texted him and asked him to call. The elder Langford said he would discuss it with his son, adding, “I’m not going to make that decision. I can’t sit here and say yay or nay.”

Romeo, the No. 5 overall senior in the country, is believed to be leaning toward Vandy but plans to make one more trip to IU at coach Archie Miller’s request. He has said he will announce his decision in a ceremony at NAHS sometime in April.

After the hiring was made official by the Cardinals, it was assumed coach Chris Mack may have an outside shot at landing the elite guard. However, in a diary he is writing for USA Today Romeo had this to say:

“I was asked this afternoon by a reporter if Chris Mack coming to Louisville changes anything for me, and my answer was not really.”

Langford was originally strongly considering UofL but eliminated the Cardinals when Pitino was fired as the result of an FBI investigation into corruption in college basketball.

“That killed that,” Tim Langford said. “That was a no-brainer right there.”

In another immediate recruiting move, Mack offered a scholarship to Ashton Hagans, a 6-foot-4 junior point guard from Covington, Ga., who is considering reclassifying to become eligible for the 2018-19 season. At the moment, UofL has no players signed for the coming season.

Trinity High School star David Johnson, who committed to UofL on Sept. 15 before the scandal broke and then de-committed on Oct. 4, said after Mack’s hiring that he will again consider the Cards. Johnson, a class of 2019 4-star recruit, also has offers from Ohio State, Cincinnati, and Xavier.

For Mack’s wife, Christi, her husband’s hiring is a homecoming. She was an all-state athlete in multiple sports at Holy Cross High School and a runner-up for Kentucky’s 1996 Miss Basketball honor and much of her family still lives in the Louisville area.

After averaging 23.1 points and 6.5 assists per game as a senior and becoming the school’s all-time scoring leader with 1,789 points, Christi went on to star for the University of Dayton, where she is a member of the Hall of Fame.

After graduation, she served as director of basketball operations for Xavier’s women’s team and later coached girls’ high school basketball in Cincinnati. Christi and Chris Mack have three children.

Comedian and actor Bill Murray may become a familiar sight in the KFC Yum! Arena because his son, Luke Murray, is coming with Mack as an assistant after spending three seasons on the Xavier staff. He also coached two years under Dan Hurley at Rhode Island. Bill Murray often attended Xavier games.

Emily Long supplied some early power with a three-run homer in the first inning off the foul pole in left... read more