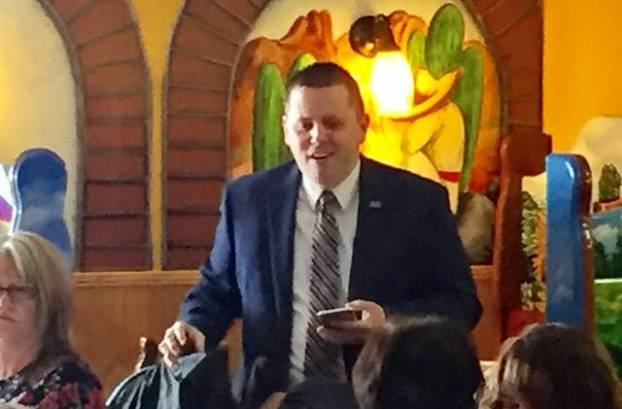 Harlan County Judge-Executive Dan Mosley speaks to the Harlan County Chamber of Commerce during a meeting on Wednesday.

Harlan County Judge-Executive Dan Mosley updated the Harlan County Chamber of Commerce on a number of topics during the chamber’s meeting on Wednesday, including the status of a bill known as the Reclaim Act currently going through the legislative process in Washington D.C.

Mosley told the chamber he had been in Washington D.C. on Tuesday, and advised them about the status of the Reclaim Act, which would benefit the area should it pass and be signed into law.

“The Reclaim Act is a bill that has been pushed by Congressman Hal Rogers for the last three years,” Mosley said. “We passed a resolution to support it in 2015. It still has not been voted on.”

Mosley explained the bill made it through the House committee, but has stalled.

“What this bill will do, it will release $100 million of the $2 billion that’s in the AML fund to clean up old coal mine sites and reclaim them for economic development purposes,” Mosley said. “It has a lot of bipartisan support. But, there have still been some folks who have not gotten behind it.”

Mosley explained while the bill made it out of committee, the House has still not put it to a vote.

“It’s never made it to the Senate,” Mosley said. “So myself, representing 16 judge-executives in the region who signed on to support this, went to D.C. with several representatives of companies who do reclamation projects.”

Mosley said the group talked to officials about what the bill would mean to the people of eastern Kentucky.

“If we’re able to reclaim these sites, we would be putting people to work immediately doing the reclaiming,” Mosley said. “Then, if you get the site ready, you’re able to use that sight as an economic development tool later on.”

“We had some very productive conversations,” Mosley said. “At the end of the day, Congressman Rogers doesn’t feel this is going to get a vote on the House floor. So, what we’ve done is shifted our strategy on this bill to try to get Senator McConnell to attach this bill to the federal omnibus spending bill.”

Mosley said there has been no promise to attach the Reclaim Act to the spending bill.

“The problem with that is, there’s politics involved,” Mosley said. “We don’t know if it will get attached. Senator McConnell’s staff wasn’t optimistic or pessimistic. It was just a ‘we don’t know’ kind of thing. We’re still in limbo as to what will happen. We left with a very good feeling about their support for this bill.”

Mosley said in Harlan County alone, there are 66 AML-eligible projects.

“These funds need to be released, particularly because we can see value in it for job creation,” Mosley said.

Photos by Joe P. Asher With spring less than a week away, a surprise snow hit Harlan on Wednesday. The... read more