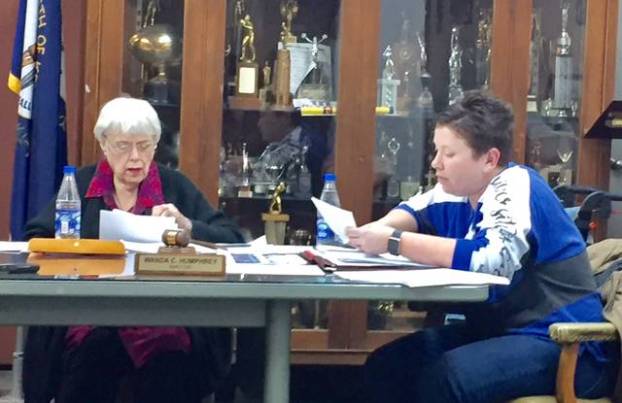 Benham City Clerk Jessica Smith performs and Benham Mayor Wanda Humphrey listens to a first reading of a proposed tax ordinance during a meeting on Thursday.

The Benham City Council decided against a proposed ordinance to levy a tax on insurance premiums during a recent meeting.

City Clerk Jessica Smith performed the first reading of the ordinance for the council in front of a full house, with many Benham residents in attendance.

Smith explained the ordinance would place an 8 percent tax on insurance premiums for city residents. She also explained more than half the cities in the state of Kentucky have such an ordinance, including other cities in Harlan County.

Smith told the council she had researched some questions asked by the council concerning the ordinance at a previous meeting. She stated the tax would not apply to Medicare, would be levied according to physical addresses and only the first year’s premium on life insurance would fall under the ordinance.

Smith said the ordinance was developed in order to create revenue for cities.

Several residents in attendance stated they did not support the ordinance.

A resident asked how much income the city brings in without the tax.

“Right now, on average we bring in about $30,000,” Smith answered. “By the time you take payroll, Kentucky retirement, pay the garbage fee, the loan payments, the 911 dispatching service, the telephone bill, life insurance for employees, postage, bank fees, pay the fire department for radio service, the Kentucky Utilities bill for the pump stations, the insurance premiums, gross utility tax, sales tax, the fuel bill, water and sewer testing and the average electric bill, we’re in the hole $4,926. This does not include paying the Internal Revenue Service or any small bills or vehicle repairs.”

A resident stated customer’s water bills from the city of Benham are higher than the national average. Another resident suggested cutting out overtime for city employees.

Council member George Massey pointed out many Benham residents are on a fixed income.

“Over 90 percent of people in Benham are on a fixed income,” Massey said. “There’s no more money coming. If it wasn’t for the power board, the city would have gone under a long time ago. But, I can’t see it. I can’t afford it.”

After some further discussion, the council voted against the ordinance.

The proposal was defeated by a vote of three against and two in favor of the ordinance.

Anyone looking for a good meal in Harlan has a number of options, and the upcoming event dubbed ‘Harlan Chows... read more