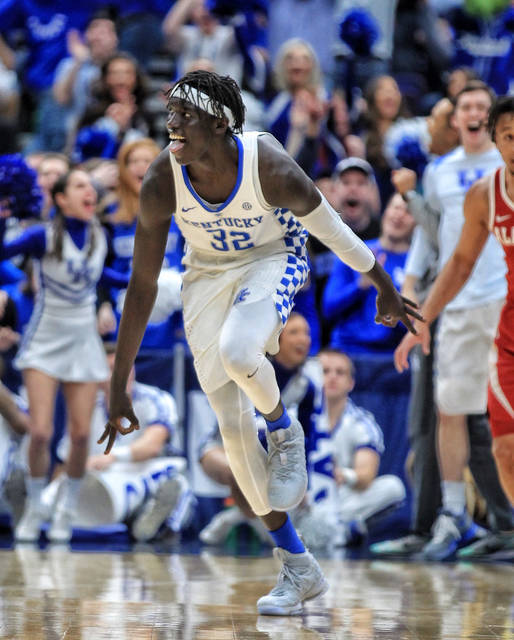 Wenyen Gabriel hit seven 3-pointers and scored 23 points to lead Kentucky to an 86-63 win over Alabama in the SEC semifinals on Saturday.

Gabriel set a school record for most 3-pointers made in a Southeastern Conference Tournament game with seven and also set a new school mark for most treys made without a miss with seven to lead the Wildcats to an 86-63 win over Alabama Saturday.

Gabriel’s 23-point performance put the Wildcats in the conference championship game for the fourth straight season. Kentucky (23-10) will take on Tennessee in the finale set for 1 p.m. Sunday at the Scottrade Center. The Wildcats have won 11 straight league tournament games and building momentum for the upcoming NCAA Tournament.

Overall, five players made at least one shot from long range and it was Gabriel who set the tone. Gabriel’s biggest trey came after Alabama pulled within nine with five minutes remaining, which sparked a 6-0 scoring spree and provided a boost for the Wildcats down the stretch.

“It was crazy,” Kentucky forward Sacha Killeya-Jones said. “Everybody in the arena could feel the energy, especially on those last couple of threes. I didn’t realize he was 7-for-7 and that’s something I’ve never been a part of before. We all know when he hits his stride, he’s hitting. We watched him hit 80 shots in five minutes in practice. We know he can shoot, but to see him do it in a game like that, especially in a big game is really good.”

Gabriel’s performance was inspired by an early turnover, followed by a verbal challenge from his coach.

“He challenged me at the beginning of the game after a turnover and I just stepped up (to the challenge),” he said. “I tried to conquer myself and I feel like I did that today.”

From that point on, Gabriel provided one dagger after another against an Alabama squad that used a Collin Sexton runner at the buzzer to beat Texas A&M and knocked out top-seeded Auburn out of the tournament one day earlier.

For Gabriel, who also had three blocked shots, it was just like old times.

“It felt like I was back home playing at the park with my friends,” he said. “Every shot goes in and like when you’re working out and there’s nobody on the court with you.”

Although a surprise to many, Gabriel’s three-point barrage wasn’t surprising to his teammates, including PJ Washington.

“I knew he was going to have a good game sooner or later,” Washington said. “He hits a lot of shots in practice. We knew once he got the ball it was going up and we feel like it’s going in every time. He just had a great game.”

Not even Kentucky’s leading scorer and co-SEC Freshman of the Year Kevin Knox was caught off-guard by Gabriel’s performance in a postseason environment.

“I knew was going to have a big game sooner or later,” Knox said. “He really gets in the gym and he’s a really hard worker and knocks down shots. He’s one of the better shooters on the team. I knew he would have a breakout game like this and it was great to watch. He was really making everything. I don’t think any of his shots hit the rim. It was crazy and nothing but net. That was fun to watch.”

Alabama guard Braxton Key tipped his hat to Gabriel and said his hot hand made it hard for the Crimson Tide to get into a rhythm on both ends of the floor.

“He was hitting some tough threes,” Key said. “We were contesting them and on the scouting reports we knew he could hit threes. It was tough. One time I contested (his shot) and got a piece of it and it still went in. He made some tough threes.”

Dazon Ingram added Alabama had Gabriel’s name circled on the scouting report, but said his timely shots in the perimeter were hard to overcome.

“He had a heck of a game,” Ingram said. “He hit seven threes in the SEC Tournament and that’s incredible. It’s really tough when you don’t key in on a player like him. He was the one who hurt us.”

Gabriel took the performance in stride.

“I don’t know if you can get much hotter, but I couldn’t miss,” he said. “I think I was in the zone after probably my third three.”