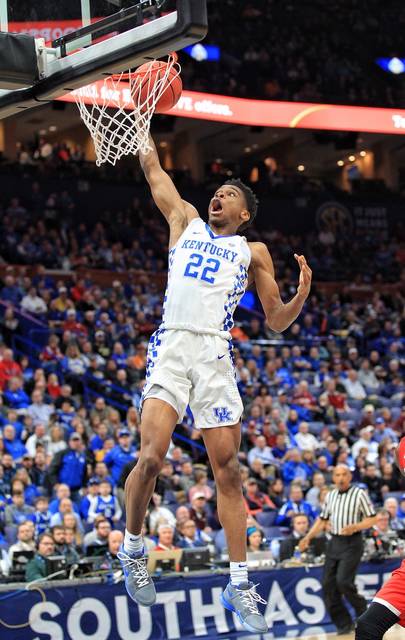 The fourth-seeded Wildcats (22-10) advanced to the semifinals with a 62-49 win over Georgia Friday afternoon. Kentucky, which has won 10 straight tournament games, will take on surging Alabama at 1 p.m. Saturday. The Crimson Tide (19-14) rolled past No. 1 seed Auburn 81-63 in the first of four quarterfinals games at the Scottrade Center.

For Kentucky, avoiding an upset was the first step toward achieving success in the postseason.

“It was a good win,” Kentucky coach John Calipari said. “(The) first game out is always hard, especially when the other team has played (in the tournament).”

Although Georgia had two games under its belt, Kentucky had to overcome the jitters and the absence of one of its top players. Freshman Jarred Vanderbilt, who injured his ankle in practice earlier this week. Vanderbilt watched while dressed in street clothes on the bench. Calipari also doesn’t expect Vanderbilt to play in the semifinals against Alabama.

“We were trying to figure it out without Jarred,” Calipari said. “Jarred, what I saw today, he’s still limping. Learning to play without him was a big part of today.”

PJ Washington, who led the Wildcats with 18 points and grabbed seven rebounds, admitted it wasn’t easy playing without Vanderbilt and wanted to make a good showing to open the tourney.

“It was hard to see him go down,” Washington said. “We just all tried to step up and get this ‘W’”

The Wildcats adjusted to the absence of Vanderbilt by spreading the wealth in both the scoring and rebounding department. Kevin Knox and Shai Gilgeous-Alexander followed Washington with 15 points apiece. Gilgeous-Alexander just missed out on a double-double with nine assists and Knox chipped in with nine rebounds, including seven on the defensive end.

Gilgeous-Alexander said the Wildcats’ performance in an 80-67 loss at Florida in the regular-season finale provided a spark for his outing against the Bulldogs.

“I felt like we weren’t competing (at Florida) and mentally locked in,” he said. “I just wanted to do that today.”

Washington, Gilgeous-Alexander, and Knox scored 25 of Kentucky’s 30 points in the opening half and continually pressured Georgia in both ends of the floor. The Bulldogs’ final tally was the lowest offensive output against the Wildcats this season.

Even without one of their top rebounders and contributors off the bench, the Wildcats held their own against a Georgia team that ran out of steam after winning two straight games to open the five-day event.

Kentucky’s game plan was to simply wear the Bulldogs down from start to finish.

Georgia outrebounded Kentucky 42-39 but Kentucky forced 11 turnovers and scored 14 points off those miscues. The Wildcats also had just five turnovers.

“I like the fact that we rebounded the ball,” Calipari said.

Georgia, which defeated Vanderbilt and stunned No. 5 seed Missouri to reach the quarterfinals, couldn’t pull off the same feat for the third game in a row and fell to 18-15 in the season. Yante Maten, the Bulldogs’ leading scorer, made just two field goals and finished with nine points.

“We just disrupted him and double-teamed him when he got too deep in the post,” Kentucky forward Wenyen Gabriel said. “We wanted to force turnovers so we could get up and down the court. We tried to get into their legs with their third game and three days and we had to keep running.”