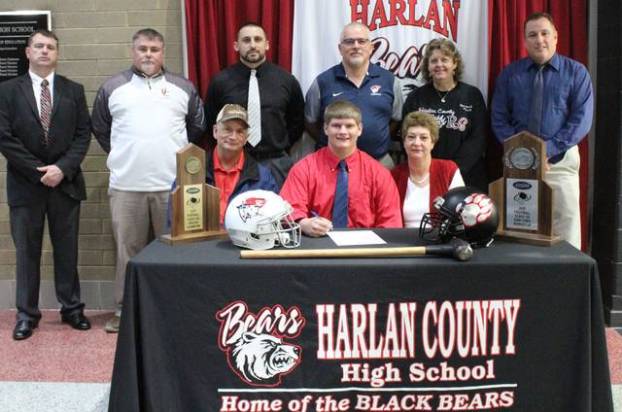 During a senior season in which he provided both toughness and grit to the Harlan County Black Bears, lineman Ethan Baird prompted almost identical descriptions from coaches J.B. Donahue and Eddie Creech on the day he signed to continue his football career next fall at the University of the Cumberlands.

“He’s what some of us coaches would call a throwback,” said Creech, who coached Baird the past three years at Harlan County. “He played banged up his junior and senior year and gave us literally everything he had on the field. I’m sure all the guys around him noticed what he battled through to be able to play both ways. I hope that carries over and shows them what it takes to be a football player. I think we learned what 11 of those guys like that working together can accomplish.”

“He’s a throwback, an old-school football player,” added Donahue, an assistant with the University of the Cumberlands after 24 years as the head coach at Harlan High School. “We remember the old pictures of players like Bronco Nagurski and Ray Nitchske with blood across their nose and still out there playing.

“I think his ability on the field is second to none, but he also sets a good example in the classroom. He’s great in both of them and has a lot of toughness to him.”

Baird, at 6-2 and 245 pounds, was one of the most consistent Bears last season as he helped lead HCHS to an impressive postseason run that included the school’s third Region 4 championship. When half the starting lineup was out with injuries at midseason, Baird continued to grind away on both the offensive and defensive lines.

“I’ve been like that my whole life. We all get bumps and bruises, but I try to tough it out the best I can,” said Baird, who was impressed with the Cumberlands during a visit.

“I loved the campus and met with professors, and I also love the way coach Donahue and (head) coach (Matt) Rhymer run the program. It felt like a good fit for me,” said Baird, who has a 3.9 grade point average in high school and plans to major in biology and minor in chemistry before going into the physician assistant program.

Both coaches like Baird’s chances of contributing with the Patriots.

“I think the main thing for Ethan and all our kids is that they hang in there long enough until they can get in the mix,” Creech said. “I think Ethan will have a successful college career based on his heart and grit. He has a lot of heart and he’s a fighter. If he hangs in there and pays his dues we’ll be talking in a couple of years about how good of a college player he was.”

“Our plan is to play him on the defensive line. We think he can vie for some playing time,” Donahue said. “He’s a very competitive kid who will push somebody.”

While he looks forward to the next step in his future football career, Baird took a moment to reflect on the biggest play of the Bears’ 2017 season when he and his teammates made a fourth down stop against Matt Sizemore and North Laurel in the state playoffs.

“It was a moment we just bonded. We knew we were going to stop them,” Baird said. “There wasn’t one person on the team who didn’t love everyone else.”

Donahue said he hopes to be a regular at Harlan County High School over the next several years when filling out the roster for the Cumberlands.

“It tickles me to death to think I’m at the college level and we can get some kids from here,” he said. “This is a successful program and kids from successful programs make you successful. It’s always gravy to get to come back home. This wasn’t my school, but this is still my county and I’ve always been for Harlan County kids.”

CORBIN — Any basketball fans in The Corbin Arena on Monday old enough to remember 1978 probably had to take... read more