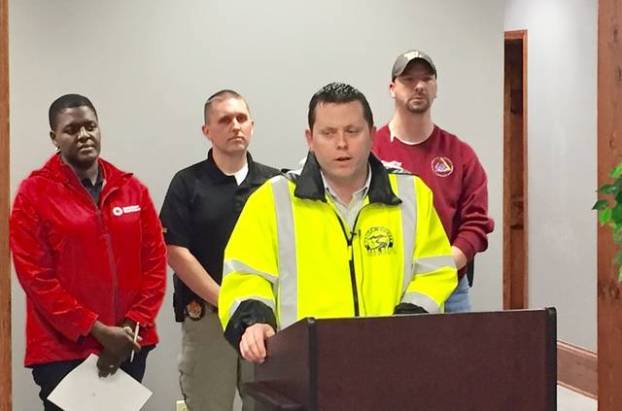 Harlan County Judge-Executive Dan Mosley held a press conference along with other officials on Friday to provide an update on the flood damage situation and recovery efforts which are underway in Harlan.

Harlan County is still recovering from severe flooding that occurred approximately one week ago when heavy rains hit much of eastern Kentucky.

Harlan County Judge-Executive Dan Mosley held a press conference on Friday to update the public about the ongoing recovery efforts.

“We’re less than a week removed from the fourth worst flood event to hit Harlan County since 1977,” Mosley said.

“The estimated totals to all local government maintained infrastructure in Harlan County…exceed $500,000 in damage,” Mosley said. “The threshold to qualify for state and federal assistance is a little over $100,000 so we have far exceeded our threshold.”

Mosley said over the course of two days, more than 90 million gallons of water was pumped out of the flood protection area in the city of Harlan alone. The Red Cross will be stationed at the Harlan Courthouse through Monday at least.

“If you have damage to living quarters and you have not reported it, please report that to our office at 606-573-2600,” Mosley said. “It’s important we have all living area damage documented in the county.”

Mosley said there are 16 homes in the county that are uninhabitable. He also pointed out the numbers aren’t in yet statewide to know if the state will qualify for any federal aid, such as FEMA assistance.

“You may be asking how you can help as a citizen if you have not been impacted by the flooding,” Mosley said. “There are ways you can help. The Red Cross accepts donations. With Love From Harlan, a non-profit organization, is serving as the donation coordinating resource for Harlan County Emergency Management and they are actively looking for furniture, bedding and necessary items for the people who were impacted by this.”

“Early on Saturday around 10 a.m. it should start raining and last for about 12 hours,” McGill said. “In that time period, we’re expecting about one inch of rain.”

McGill said water is not expected to reach flood stage.

“If you have donations for the With Love From Harlan organization, you can contact my office at 606-573-6082 and we can get the information to them so they can make arrangements to pick up those donations,” McGill said.

“The main thing we want to make everybody aware of is the potential for scams that we often see in situations such as this,” Cope said. “We currently do not have any reports of any scams.”

Cope advised residents thoroughly check out anybody offering to do work around their property or help with damage.

“Make sure they are reputable people,” Cope said. “Be cautious if they’re asking for full payment in advance before doing any work”

Cope asked anybody who is the victim of a scam to contact the Harlan County Sheriff’s Office.

“We absolutely are not going to stand for anyone trying to take advantage of our local residents’ misfortune in this disaster,” Cope said.

Janie Torstrick is taking members of her academic team to Louisville for the 2018 Kentucky Governor’s Cup competition March 17-19.... read more