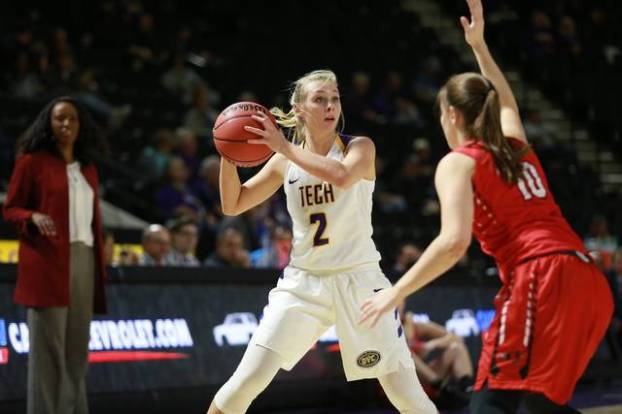 Freshman guard Jordan Brock scored 30 points in Tennessee Tech’s loss to Southeast Missouri, becoming only the sixth freshman in school history to score at least 30 in a game.

The Golden Eagles fell to Southeast Missouri 70-66 in their third-straight game decided by four points or less.

“Another tough, hard-fought game by our team,” said coach Kim Rosamond. “I think our team continues to get better every single game. I see growth, I see fight, I see a lot of really, really good things. At the same time, we are still having crucial breakdowns at crucial times, and the margin for error is really small.”

Tech’s struggle tonight was from the free-throw line, as the team shot just 63 percent and made only 17 of its 27 attempts.

As one of two Tech players to make all of her free throws, Jordan Brock also scored in other ways on Thursday night. Brock has shown throughout the season that she can score big but made an especially big statement against Southeast Missouri, putting up a career-best 30 points. It marked her third 20+-point game of the season and obliterated her previous career-high of 21 points.

The Harlan native also put her name in the record books, becoming just the sixth Tech freshman in program history to score 30 or more points in a single game. She is the first in 13 years to accomplish the feat – Stefanie Holbrook was the fifth freshman to have a 30-point game all the way back on Jan. 6, 2005, scoring 30 against Eastern Illinois.

Brock made seven of her 13 3-point tries to put her 3-point percentage at 53.8, also getting a new career-high in 3-point attempts. She went 5-for-5 from the free-throw line as well.

“I’m just trying to win,” said Brock, the First National Bank of Tennessee-Special Olympics Player of the Game. “If my team needs me to come out there, play some defense and knock down shots, then that’s what I’m going to do.”

Anacia Wilkinson was the only other Tech player to reach double-figures, scoring 12 points and adding six rebounds in 17 minutes off the bench. It marked the most points she’s scored since her career-high of 16 points against East Tennessee State back on Dec. 11, 2016.

Tech got strong play from the rest of its bench, including Kentoria Alexander. The junior college transfer totaled season-highs in minutes (28), points (six) and assists (seven).

The Golden Eagles have unfortunately been on the wrong end of three-straight incredibly tight games, but the team is inching ever closer to putting all the pieces of the puzzle together.

“I can tell you every one of our kids in that locker room want to win. They’re doing everything preparation-wise that they can do to win. We just have to keep focusing, working and taking these lessons that we’re being given each game and learn and grow from them from each game to the next.”

A look at the upcoming week around the Southeastern Conference: GAME OF THE WEEKEND: Most of the SEC will be... read more