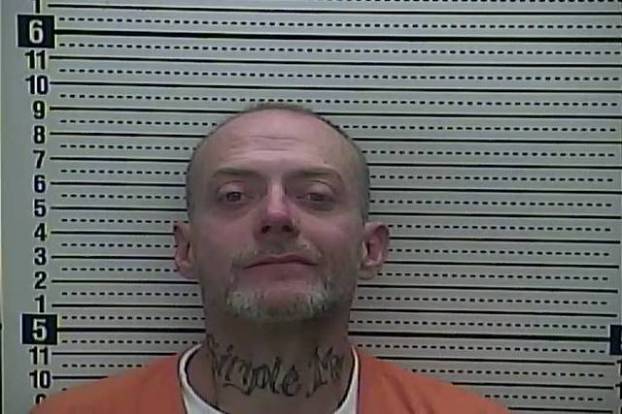 A Cumberland man was sentenced to five years in prison in Harlan Circuit Court recently for receiving stolen property and being a convicted felon in possession of a firearm.

According to the indictment handed down by the grand jury on Jan. 23, 2017, Johnson was in possession of a stolen handgun on April 24, 2016.

The citation issued at the time of Johnson’s arrest states he was stopped following a complaint stating he had a firearm. He was found with a loaded .38-caliber Smith and Wesson handgun in his front right pocket. He was also found in possession of steel knuckles.

According to the final judgment order, Johnson entered a guilty plea on June 15 to convicted felon in possession of a firearm, receiving stolen property, carrying a concealed deadly weapon and second-degree persistent felony offender.

Hendrickson sentenced Johnson to a total of five years in prison. The order also states Johnson will not move for shock probation as part of the plea agreement.

In other court activity, Randy Adkins, 32, of Harlan, was sentenced after his pre-trial diversion was revoked in Harlan Circuit Court.

The final judgment order states Adkins entered a plea of guilty to second-degree criminal abuse on Jan. 3, 2013. Adkins was granted pre-trial diversion for a period of three years for second-degree criminal abuse. The order also states Adkins left a residential program at Isaiah House against staff recommendations and refused to return. He also failed to complete treatment for substance abuse as directed by the court and absconded from probation supervision.

The indictment stems from Adkins’ December 2011 arrest. According to the citation issued at the time of arrest, Adkins whipped a four-year-old child with a necklace.

Hendrickson sentenced Adkins to a total of five years in prison and remanded Adkins into custody to begin his sentence.

A Kenvir man is facing assault charges after allegedly assaulting a man with a metal pipe. Cody Wynn, 32, was... read more