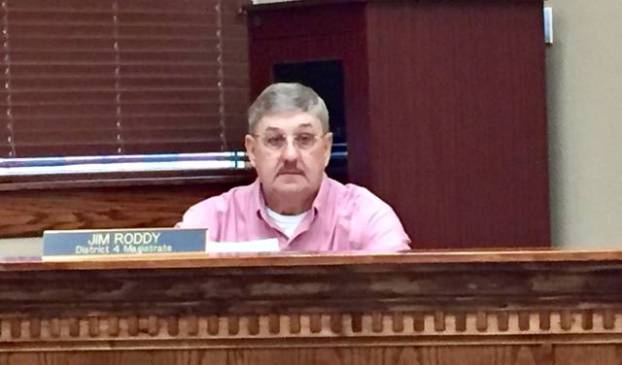 Magistrate Jim Roddy listens to a bid for a construction project during a fiscal court meeting on Tuesday.

The Harlan Fiscal Court accepted a bid from Extreme Designs during a meeting on Tuesday for the construction of a second station for the Sunshine Volunteer Fire Department.

Harlan County Judge-Executive Dan Mosley brought the topic up to the magistrates near the meeting’s halfway mark.

“The engineer who has worked on this project was going to be here, but he was coming from Pikeville and has not been able to make it,” Mosley explained. “They’ve forwarded a copy of the bid tabulations, which our staff sat in on when those were opened.”

“Three contractors bid the project,” Mosley said. “The bids included a base bid and the amount of construction days that were required to estimate a timeline for construction to be completed.”

Mosley explained the lowest bidder did not include required information, including a completion date.

“The two things that should disqualify the lowest bid are the contractor did not fill out the time of completion,” Mosley said. “This could be a big problem since this is a time sensitive project. Number two, the contractor did not acknowledge addendum one, which is part of the bid documents and would change the scope.”

Magistrate Jim Roddy made a motion to award the project to Extreme Designs, the next lowest bidder.

“We have a motion to accept the bid from Extreme Designs in the amount of $94,500,” Mosley said.

The magistrates approved the motion with no opposition.

• The Harlan County Sheriff’s Office statement of receipts, disbursements and excess fees for 2017 was accepted;

• Easement agreements with the state on land owned by the Harlan Fiscal Court were approved;

• A trustee agreement with Monticello Banking Company in regard to The Laurel’s Inc. was approved;

• Permission to apply for a KBEMS ground ambulance block grant was approved;

• Permission to apply for the Kentucky Energy and Environment Cabinet’s Division of Waste Management Household Hazardous Waste Grant was approved;

• Permission to apply for the Kentucky Energy and Environment Cabinet’s Division of Waste Management Composting Grant was approved.

Let your children ‘dream out loud’