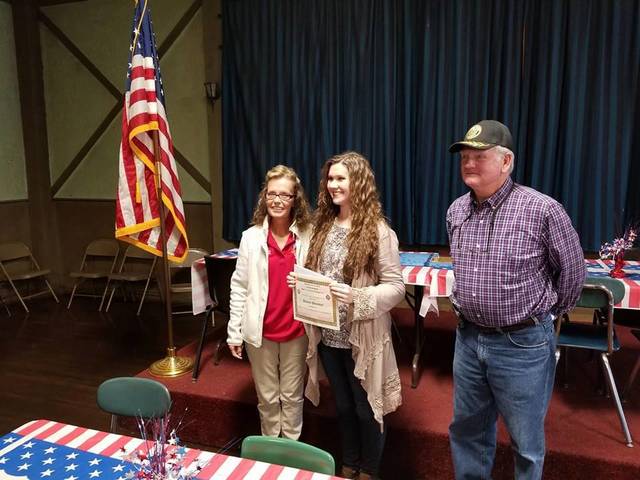 Autumn Dunaway (center) is moving to the state level in the Voice of Democracy audio-essay contest. She is pictured here with Carla Barrett and Cleon Cornett.

A local high school student is headed to the state level of competition in the Voice of Democracy audio-essay competition.

Autumn Dunaway, 18, recently won the 2017 VFW and VFW Aux 5171 Voice of Democracy winner. She is the daughter of Jay and Stephanie Dunaway.

“It’s an audio-essay competition,” Dunaway said. “The prompt this year was “America’s History, Our Hope for the Future” and you write and record an essay to that prompt.”

Dunaway said this is her first time entering the Voice of Democracy contest, but she previously competed in the Patriot’s Pen contest when she was a middle school student.

“The Patriot’s Pen contest is sort of a precursor to this contest,” She explained. “You write an essay, but you don’t have to record it.”

Dunaway said she took inspiration for her essay from the 9/11 memorial.

“This summer, I went to the 9/11 memorial at ground zero,” Dunaway said. “At ground zero, there was a tree called the Survivor Tree. It was the only tree that survived the terrorist attack.”

Dunaway explained the Survivor Tree had been taken off the site and nursed back to health.

“It stands there now with a mangled stump but these new, beautiful branches,” Dunaway said. “That kind of represents our rough past and our hope for the future.”

According to the Mountain Trail Auxiliary to VFW Post 5171 in Cumberland’s Facebook page, the Voice of Democracy essay program was established in 1947 and provides high school students with the unique opportunity to express themselves in a democratic and patriotic-themed recorded essay. Each year, nearly 40,000 9-12 grade students from across the country enter to win their share of $2.1 million in educational scholarships and incentives awarded through the program. Each year more than 125,000 students in grades 6 through 8 enter the VFW’s Patriot’s Pen youth essay contest. The first-place winner from each state competes for national awards totaling $50,000, with each first-place state winner receiving a minimum of $500 at the national level. The national first-place winner wins $5,000 and an all-expense-paid trip to Washington, D.C. in March.