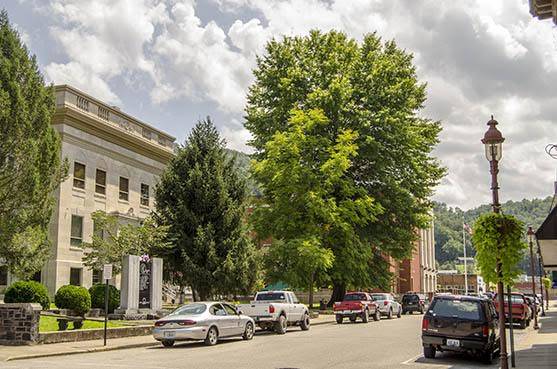 HARLAN — A mental snapshot of Harlan County, taken by 23 visitors, showed the county is rich with history and natural beauty, and local folks are friendly and personable. They also noticed that one of the challenges during their visit was finding unique downtown dining and shopping options.

The visitors were part of a University of Kentucky program called First Impressions, offered by the Community and Economic Development Initiative of Kentucky in the College of Agriculture, Food and Environment. To date, more than 20 communities have enrolled in the community assessment, which uses first-time visitors to pick up on the strengths and weaknesses of towns or counties—very much like stores use secret shoppers.

Trained volunteer teams make unannounced, one-day visits to a location and record their observations on appearance, infrastructure and services. CEDIK personnel compile the reports and present them to the community, along with suggestions and resources to address areas where change might be needed.

People often come to hear CEDIK’s presentation with some trepidation, thinking they are going to receive a lot of bad news. Instead, Melissa Bond said, they find that there is much they can be proud of.

“Local residents walk away feeling like this assessment helps them see their community with a new lens and focuses their efforts on what they want to work on to improve,” said Bond, First Impressions program director.

“First Impressions allows us to expand our horizons as well as to help these groups accomplish they want to see happen in the community and across the county. I see it as an expansion of what we’re currently working on with several groups across the county,” he said.

The program is tailored to meet a community’s needs. Bond said one county was named a top destination to retire, and they were not sure they were prepared for that.

“They knew they were a lake community, they knew they had a lot of retirees, but they were concerned that they did not have enough emerging professionals to take over the businesses left by those who had retired,” she said.

Based on those concerns, CEDIK put together a team that was made up of retirees or those about to retire, as well as emerging professionals entering the workforce.

For Harlan County, the First Impressions team comprised college students interested in outdoor activities and those interested in community development, as well as seniors. The team began their research on the Internet, exploring the county’s websites and social media presence. Then, after a drive through the county, team members spent a day exploring, assessing aspects as diverse as signage, streetscapes, recreation, real estate and even how frontline staff at the hospital answer questions. They recommended developing regional branding strategies, providing better signage, particularly for trailheads, and organizing volunteers for cleanup projects.

Because Harlan County is so large, Bond has presented Harlan County’s First Impression report three times, once at the extension office to a community forum, one in the Tri-Cities area of the county, and the latest to the Harlan Chamber of Commerce.

Geoff Marietta, executive director of Pine Mountain Settlement School, a national historic landmark, attended the Chamber of Commerce presentation and agreed with the report that one of the strengths of the area lies in its people and in the natural world.

“The mountains are as beautiful as you’ll find anywhere in the world. We have incredible hiking trails, off-road trails, great fishing, lakes, streams,” he said. “Then we have really rich cultural assets and heritage. Coal mining drove the economy for so many years, and from that we have the traditions and culture of all these immigrant communities who came here to make a living as citizens of the United States.”

Marietta believes the report creates a baseline for work to progress.

“It gets everyone on the same page, understanding what the challenges are and putting that in print, so we don’t have misunderstandings about where we’re starting and what needs to happen next,” he said.

“We didn’t have a whole lot of negatives in there, which was surprising,” he said. “And the negatives that were in there, I don’t think they’re going to be that hard to correct.”

“I think the sky’s the limit on a lot of this stuff,” he said. “It allows us to tell the story of our area and to do a lot of outreach and to hopefully bring in tourism, but also maybe even educate our youth, our future leaders that are coming up through the school system.”

A Promise Zone downtown revitalization grant funded the Harlan County study and a number of other studies in Promise Zone designated counties in Eastern Kentucky. First Impressions, however, is a statewide program. Begun two years ago, Bond said they have been in every quadrant of the state.

More information about First Impressions can be found at https://cedik.ca.uky.edu/content/first-impressions or by contacting Bond at 859-218-4385.