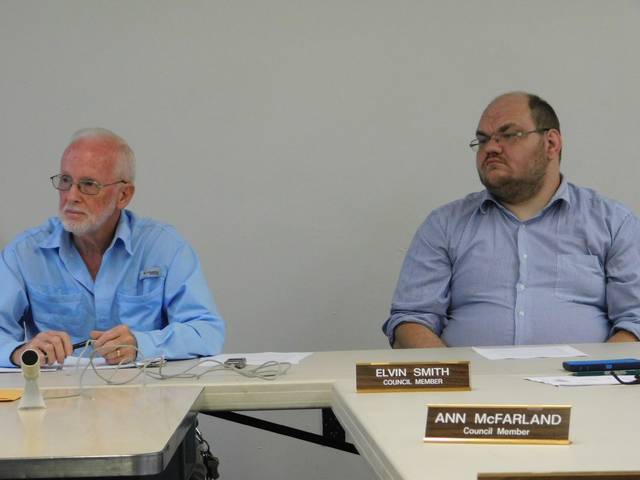 During Monday’s regular scheduled Loyall City Council meeting, Mayor Clarence Longworth brought up he has recently been faced with questions of “conflict of interest” concerning being the mayor and working on city equipment.

Longworth said he wanted to address the issue by having city attorney Danny Lunsford explain the city’s code of ethics concerning the matter.

Longworth, who is the owner and operator of Longworth Body Shop, said he has been working on the city’s equipment for many years even before he was elected to the council as a council member or elected mayor.

“At that time — I don’t remember who was on the council — I brought it before the council and they voted for me to continue working on the city vehicles,” said Longworth.

Longworth said since the question of conflict of interest has surfaced recently he asked Lunsford to check into it and speak with the League of Cities about the legalities.

Lunsford said there is in fact a statute in regards to works performed for the city by a private entity, which states that any work project which is going to cost the government more than $20,000 per year the city must publish that and vote on the bids they receive.

“Anything less than that does not have to be advertised and the city is free to hire whoever they want to do it,” said Lunsford.

Lunsford added that the city has a code of ethics which states that concerning an elected official and anything they do cannot be a conflict of interest as long as it does not affect their judgment.

“The mayor doesn’t even have a vote, I seriously doubt it will affect his ability,” said Lunsford. “I don’t see anything that violates the code of ethics.”

Longworth asked the council if they wanted to vote to have him to continue to work on city equipment and council member Treena Cornett asked if she could ask him some questions.

Longsworth responded saying that he hasn’t made $20,000 since he has been there.

“Do you think it alters or influences what you do as far as working and maintaining the vehicles because you are the mayor?” Cornett asked, to which Longworth answered “no.”

Longworth said there are times that he actually does the city’s work for as near to nothing as he can.

The council voted unanimously for Longworth to continue to maintain the city’s equipment, with Lunsford saying there was no reason to adopt any type of ordinance on the matter due to the situation being cited in the city’s code of ethics. Lunsford said the minutes from the meeting would serve as something for the records to show that Longworth has been given the vote by the council to continue his work for the city.

In other business the council heard the first reading of an ordinance regarding garbage pickup within the city limits. The second reading will be heard next week during a special-called meeting.