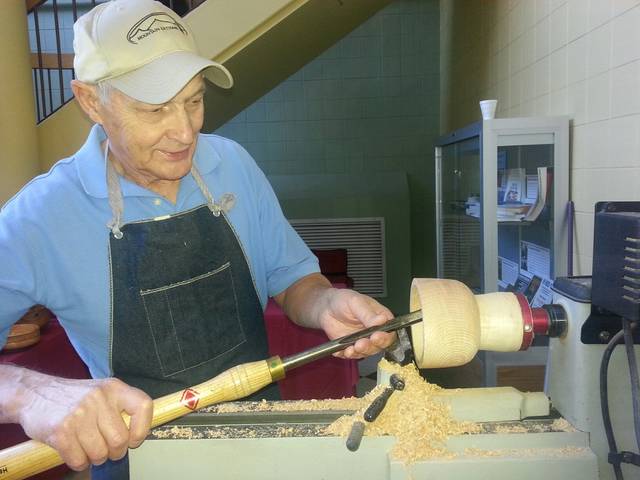 John Brock, of Pineville, is a woodturner. He demonstrated his craft during the annual Swappin’ Meetin’ Festival on Friday. The festival continues on Saturday.

John Brock, of Pineville, is a woodturner. He demonstrated his craft during the annual Swappin’ Meetin’ Festival on Friday. The festival continues on Saturday.

Several wood-crafted items by John Brock, of Pineville, were on display at the festival.

Amanda Wynn and Evelyn Sexton are employees of Southeast Kentucky Community and Technical College, Whitesburg campus. They attended the festival and enjoyed some food from one of the many vendors participating.

Carla Barrett is pictured with a booth for the Mountain Trail VFW Auxiliary 5171. She had lots of information for scholarship programs the group participates in. Some of those include: Voice of Democracy, Patriots Pen, Continuing Education scholarships, as well as VFW Auxiliary Memberships.

Chloe Cook, of Gordon, enjoyed getting her face painted by Shannon Letourneau, of Fancy Face Painting.

Chainsaw woodcarving was on display by Daniel Osborne, of Cawood.

Ellen Brashear, of Harlan, purchased some items from Debra Cornett, owner of Suds and Stitches. Cornett is from Ages.

Francis Whitaker talks with a customer at her booth.

A Health Fair was a combined effort of ARH, UK Markey Cancer Center, the Kentucky Cancer Project and the KCTCS Nursing Program.

Several visitors of the festival participated in the Health Fair.

June Saylor, of Harlan, looks over a large container of pumpkins.

Larry Counts is a longtime favorite at the festival by participating for more than 20 years. Counts demonstrates his craft of making brooms.

Natasha Browning, of London, had a display of numerous crafts. She said her mother-in-law, Doris Browning is from Cumberland.

Preston and Polly McLain, of Evarts, participated with a booth at the festival.

The quilt display is a longtime favorite for visitors.

Stewart Whitaker, of Letcher County, is weaving the bottom in a chair.