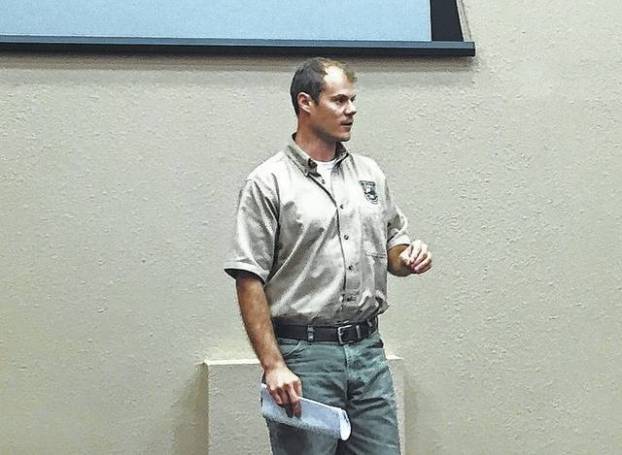 Will Bowling from Kentucky Fish and Wildlife updates the Harlan Fiscal Court on the status of the area’s elk.

The Harlan Fiscal Court heard a presentation from the Kentucky Department of Fish and Wildlife regarding the elk population in the region.

Harlan County Judge-Executive Dan Mosley called on Will Bowling of the Department of Fish and Wildlife to speak to the magistrates.

“I’m here to share some of the things we’ve been seeing in Harlan County, especially some of the economic impact we’ve seen from the elk program,” Bowling said.

Bowling said they have also noticed the elk have not been as visible as they once were for the last several years.

“We know this has happened for a couple different reasons, but the biggest thing causing that is an increased amount of hunting pressure,” Bowling explained. “The elk today are just behaving like wild elk should behave. This is what we expected.”

Bowling said he has been working with the elk project in the area since 2005.

“The way they’re behaving today is quite a bit different from the way they were behaving 10 years ago,” Bowling said. “As the herd’s grown, we’ve had the opportunity to provide more tags, and as more people started hunting them these animals started not being as visible.”

Bowling said that even though the elk are not as visible as they once were, the number of elk is high. He pointed out people coming into the area to hunt elk are spending substantial amounts of money with local businesses.

“A lot of money is spent right here in the county,” Bowling said. “A few years ago, we started doing some surveys. One of the things we saw that really surprised, the average Kentucky elk hunter — when they come into a county — they’re spending around $2,200 in the county they’re hunting in.”

“This is not money that’s going to Fish and Wildlife,” Bowling said. “We specifically told them not to count the hunting license, tags and that sort of thing. That $2,200 is being spent here with your local businesses.”

“A lot of that money is going to Harlan,” Bowling said. “A lot of those folks, they might be hunting in Leslie County, but they’re probably staying over here somewhere and probably coming to the restaurants (in Harlan).”

Bowling pointed out this is because some adjacent counties do not have as many services available as Harlan.

“When you run that through the economic multiplier for big game hunting in Kentucky, that $727,000 had an economic impact of approximately $1.5 million last year, just from the elk hunters in Harlan and adjacent counties,” Bowling said.

Bowling said as long as a strong herd can be maintained, the elk will continue to benefit the area.

(This is the third story in a series about one of Harlan County’s newest and fastest growing festivals.) The days... read more