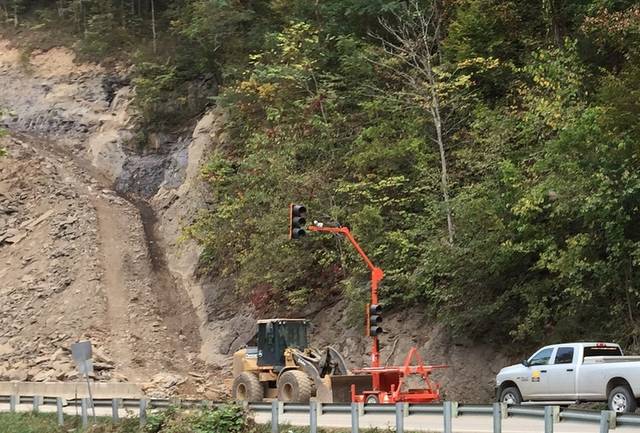 Equipment stands at the ready as a crew prepares to begin work on KY 72.

Those who travel KY 72 from Dressen toward Liggett are aware of the work underway near KY 2425, with many people experiencing delays of up to 45 minutes on occasion.

The work has been going on for several weeks and is expected to run through Oct. 31.

“I understand the public’s frustration,” Mosley said. “We have asked them (the state) over the course of the last couple weeks to do a better job in making traffic efficiently flow through there.”

According to Kentucky Department of Highways Public Information Officer Les Dixon, there is no maximum limit for traffic delays caused by work crews. However, they do attempt to keep traffic moving as well as possible.

“There is no written policy for holding traffic,” said Dixon. “As a rule of thumb, we have historically used 30 minutes, which can be very limiting in certain situations. In the absence of a written policy, there is no minimum or maximum length of time to hold traffic.”

While work is expected to continue for a few weeks, the situation may improve as the job enters another phase.

“We almost have the first cut completed and we expect the second cut to go better when we drop down to the lower bench,” Dixon said. “The department recognizes the issues with the delay to the traveling motorists. Currently the equipment is only working approximately 4.5 productive hours per shift between stoppages to allow traffic to flow safely.”

There have also been complaints concerning the dust created by the work.

Mosley said the state recently informed him they would be using a water truck to wet the road on dry days in order to keep the dust down as much as possible.

Mosley explained the county is not involved with the project.

“It’s a completely state funded project,” Mosley said. “We don’t have any control over what they do or where they do it.”

Mosley pointed out the work is addressing a serious problem.

“I’m always thankful when we get projects like this that address slides of safety issues,” Mosley said. “But in the same breath, you still have to take into account how it’s going to impact the citizens that live in that area. It’s my hope they will address the situation with the 45 minute delays that people have been complaining about.”