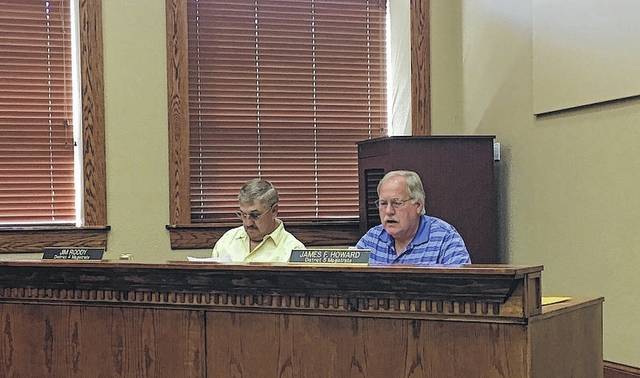 Magistrates Jim Roddy and James Howard hear a request for the county to apply for a grant to complete U.S. 421 to the Virginia state line.

The Harlan Fiscal Court heard an update on a proposed Wellness and Recreation Center during a meeting on Tuesday.

Harlan County Judge-Executive Dan Mosley brought the court up to speed on a feasibility study to determine if a Wellness and Recreation Center is possible for the county.

“That feasibility study is still ongoing,” Mosley said. “I’ll be meeting with the consultant that’s doing that later this week to get a more finalized estimate of where they’re at.”

Mosley said the study is looking at both cost and possible locations for a center.

“They were evaluating about eight different sites as a possibility,” Mosley said. “We will have much more information soon.”

Mosley said there is a possibility the consultant may be prepared to make a presentation to the magistrates during the court’s October meeting.

“They might make a presentation at the court meeting next month on where they’re at, what they figure this would cost and if the county could even afford something like this,” Mosley said.

Moving on to another matter, Mosley asked the court permission for the county to apply for a TIGER Grant.

“The court has been a participant in the past on TIGER grant applications through the federal transportation cabinet,” Mosley said.

Mosley said the grant would be aimed at completing U.S. 421 to the Virginia state line.

“This TIGER program has about $500 to $800 million eligible in that pot,” Mosley said. “They usually get billions of dollars of requests for this particular pot of money.”

Mosley told the court he had been in communication with the transportation cabinet.

“I called and asked the transportation cabinet…if we could apply for the funding considering that is a U.S. highway that the state maintains,” Mosley said. “They said we absolutely can apply. We’ll have to get some information from the state to complete our application, but that obviously is a highway that has been sitting on the back burner for 15 or 16 years now.”

According to Mosley, Virginia has not moved forward on their end because Kentucky has not finished the last section of road.

“It’s my recommendation that we apply for funds through this pot of money for the completion of that highway,” Mosley said.

Magistrate Jim Roddy made a motion to apply for the funds. The motion passed with no opposition.